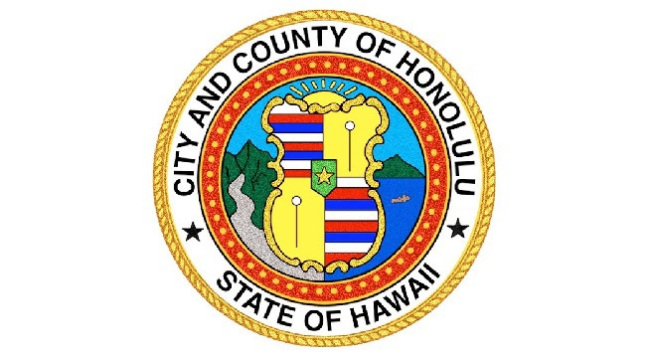 In lieu of traditional ceremonies, the City and County of Honolulu held a virtual 9/11 remembrance ceremony. Hosted by Executive Director Misty Kelaʻi of the Mayor’s Office of Culture and the Arts, the video will be posted online and on City and County social media accounts. The video features the directors of first responder and emergency management departments presenting lei to the “Eternal Flame” monument fronting Honolulu Hale. Those directors include Chief Manuel Neves of the Honolulu Fire Department, Chief James Howe and Deputy Chief Ian Santee of the Honolulu Emergency Services Department, Director Hirokazu Toiya of the Department of Emergency Management, and Chief Susan Ballard and Deputy Chief Clyde Ho of the Honolulu Police Department. The virtual ceremony is closed with a speech by Honolulu Mayor Kirk Caldwell.

“After 19 years, September 11th remains etched in our nation’s collective memory. We will never forget,” said Mayor Caldwell. “We came together then and we can come together now as a people united in a common purpose to honor those whose lives were lost, and the spirit of those who ran to danger to protect others.”

“We can still remember the images of September 11, 2001 as if they occurred yesterday and the pain of that day still sits with the families and friends of the loved ones who were lost,” said Director James Howe. “For the paramedics, EMTs and all first responders who ran into the burning buildings 19 years ago, may we never forget your sacrifice and may God Bless this resilient country.”

“We are reminded on this day of the tragic and senseless loss of life as well as how much our world has changed since 9/11,” said Director Hirokazu Toiya. “We remember also the courage and sacrifice shown by first responders, members of the military, and the whole community on that day and in the ensuing years since. I hope that we can continue to draw inspiration from their example and unite as a one to bravely face today’s most difficult times and challenges together. As we continue our fight against COVID-19, my gratitude extends to all of our front line workers as well as every single person doing their best to keep our community and families safe.”

Nineteen years later, 9/11 still serves as a reminder of why we became first responders,” said Chief Susan Ballard. “Our thoughts today are with those who were killed and those who live with the loss and pain.”

We’d like to let the public know that the virtual remembrance ceremony begins with footage showing the tragic events of Sept. 11, 2001. Viewer discretion is advised.

The virtual 9/11 remembrance ceremony is available to download at the following link: https://drive.google.com/file/d/1zma7wli8eTBEWGrG9L-EUqJ55-cxCyup/view?usp=sharing

Among the victims, 9 had ties to Hawaiʻi:

The virtual ceremony took place in front of the city’s “Eternal Flame” monument. A three-sided obelisk, it stands at about 6 feet tall and 28 inches wide. Two three-inch wide vertical gray strips are set into the front of the black tower. They represent the twin towers of the World Trade Center that were destroyed on that date. Stainless steel triangles at the top form the backdrop for the gas-fed “eternal flame.” Former City Managing Director Benjamin B. Lee designed the monument. He selected the obelisk’s triangular cross section to represent a folded flag. The structure is made of a black granite-like synthetic material and is set in a grassy area in front of a bed of copper-colored chrysanthemums.

As you face the monument, a separate black horizontal plaque sits to its right front, with a laser-etched inscription commemorating both the victims and rescuers. The inscription reads,

“Let this eternal flame unite our country in memory of those who lost their lives on September 11, 2001, and honor the brave men and women who put themselves in harm’s way to save others. The love and spirit of our grateful nation and the hearts and prayers of our people will always be with them.”