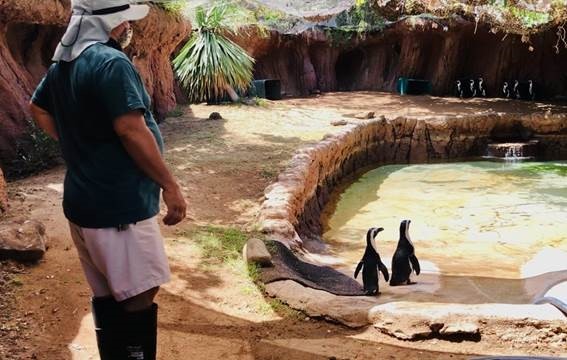 For additional images of the Honolulu Zoo’s female African penguins, please use the following link: https://drive.google.com/drive/folders/1oxtgQhW9AyBXGcK1hSfKyA0_a-iD9JFc?usp=sharing. No courtesy is required for use of these images.

African penguins (spheniscus demersus), also known as black-footed or jackass penguins (based on their cries which sound like a jackass donkey), are the only penguin species found on the African continent. They form colonies on sandy beaches in the coastal areas and offshore islands of Southwestern Africa. They “fly” through the water to catch fish in the cold ocean currents, returning to land to nest on shore. Adult African penguins grow up to 25 inches tall and weigh approximately 6-7 pounds. They have black plumages on their back and white feathers with black markings on their chest and belly. Their plumage serves as camouflage from predators with the white appearing to aquatic predators from below and black appearing to aerial predators from above. African penguins are listed as endangered by the International Union for Conservation of Nature (IUCN).

African penguins are monogamous and both male and female equally share in incubating a clutch of one to two eggs for a period of approximately 40 days. As part of the Association of Zoos and Aquariums (AZA) Species Survival Plan, the four female penguins have been identified as good genetic matches for the resident males in the Honolulu Zoo and will share the penguin habitat in the African savanna. The Honolulu Zoo’s live 24-hour penguin camera feed can be found at http://www.honolulu.gov/zoo.html.