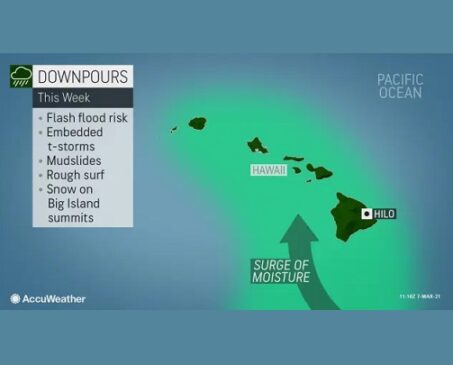 As some Americans may be finalizing spring break plans to the nation’s 50th state this week, an influx of tropical moisture causing a flood threat in Hawaii may dampen plans throughout a majority of the week.

Moisture began to push northward into part of the Hawaiian island chain this past weekend and is forecast to ramp up this week.

The first locales to feel the effects of this surge of moisture will likely be across the Big Island during the day on Monday. Flights in and out of Hilo International Airport may face delays as a result of the low cloud deck, rain and windy conditions. As the moisture spreads across the islands by midweek, similar flight issues may arise at Kahului Airport and at Daniel K. Inouye International Airport in Honolulu.

“Even though Hilo receives an average of 13.43 inches of rain during the month of March, the city is well ahead of average pace this month with nearly 7 inches during the first week alone,” according to AccuWeather Senior Meteorologist Alex Sosnowski.

“The average rainfall for the first seven days of the month is 2.84 inches, and the pattern this week has the potential to bring a month’s worth of rain to the region,” Sosnowski added.

By Tuesday, a majority of beach plans may be washed out across the island chain as cloudy skies, windy conditions and frequent showers dampen plans. For those that may be planning hiking ventures higher up in the mountains, conditions could turn dangerous as persistent rain falls.

Similar weather will persist Wednesday and Thursday as the storm system meanders overtop of the islands. With the strong jet stream winds displaced well to the north of the islands, there will not be any other incoming weather systems that will force this tropical air mass away from the islands.

“Many times, when there is a stormy pattern set up over an area with no forcing at the upper levels of the atmosphere to move it along, a flash flooding threat is likely to develop,” AccuWeather Meteorologist Mary Gilbert said.

As a result of a potential multi-day deluge, mudslides and rapid river rises, in addition to flash flooding, will all be concerning through at least midweek.

Something that may not be synonymous with typical weather across the Hawaiian Islands is the mention of wintry weather. However, there will be enough cold air in place to bring along a chance for snow across the summits on the Big Island. Coupled with an easterly wind of 20-30 mph, with higher gusts at times, a rather dreary forecast is expected for anyone thinking about venturing up beyond 10,000 feet in elevation.