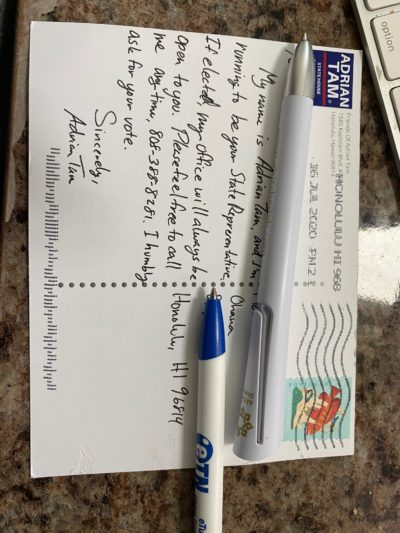 Adrian Tam wants to become one of the next representatives for the Hawaii State House. His district includes Waikiki, Ala Moana, and Kakaako. Travel and Tourism is the main industry in this district. His campaign website  states:
“While some candidates talk about the problem, Adrian has solutions.”

Adrian has a unique style to get to his constituents – a handwritten personal postcard mailed with his cell phone number included. Juergen Steinmetz, the publisher of Hawaii News Online, received such a postcard and reached out to Adrian Tam to get his views on the future of tourism; homeless issues; and developments in Waikiki, Ala Moana, and Kakaako.

Listen to his unedited comments on these important issues. Hawaii is facing a big economic unknown and it will depend on leaders like Adrian Tam to master them.

Adrian K. Tam was born and raised in Honolulu, Hawaii. He is the son of hard-working immigrant parents from Hong Kong and Taiwan who fled with their families from hardships in their home countries in search for a better life in the United States. Adrian spent his formative years in Liliha living in low-income housing provided by EAH Housing. His father was an assistant to a draftsman, and his mother was a saleswoman at Maui Divers. His family went on to open Central Pacific Properties Inc., a local small real estate firm focused on serving first-time buyers and people facing language barriers in Hawaii.

Adrian attended MaeMae Elementary School and Hongwanji Mission School before returning to public school and graduating from Kalani High School. Adrian played on the tennis and solf tennis team, but made the decision to forgo sports in order to start working multiple jobs in the foodservice industry to save up for college. In 2011, he was accepted to Penn State University where he continued to work his way through college and studied history. While at Penn State Adrian wrote numerous papers and studied indepthly into United States antitrust, poverty movements, multinational corporation history, and banking history.

In 2015, Adrian graduated from Penn State University with a degree in History. After graduation, Adrian decided to move back to Hawaii and worked for his family’s small business. In October of 2015, he was licensed to practice real estate and was then put in charge of marketing and branding for Central Pacific Properties LLC.

Adrian has become involved with many community issues including acting as a liaison between the office of Senator Stanley Chang and the Senate District 9 Neighborhood Boards, advocating for helicopter safety regulations, working on the Cool Our Schools Coalition, organizing with the April 13 East Honolulu Floods Relief,  and partaking in both the Kalani High School track and field remodeling and Paiko Ridge conservation efforts.

In 2018, Adrian was designated as a member of the Medical Cannabis Outstanding Issues Working Group in the Edibles Permitted Interaction Subcommittee. Members of the working subcommittee were tasked with gathering information about their specific topics, identifying issues, and presenting their findings and recommendations to the Working Group for further consideration for inclusion in a final report to the Legislature.

Adrian has also served multiple capacities for the Hawaii Democratic Party. He is a board member on Young Progressives Demanding Action, a member of the Waikiki Lions Club, and the former vice-president of the Taiwanese American Professionals. Additionally, Adrian has given numerous training and presentations to activists and lobbyists on best practices on how to best approach the legislature.

Adrian currently maintains a license to practice real estate in Hawaii. He is eager to serve House District 22 and the State of Hawaii.