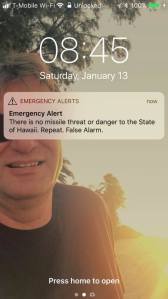 It took 38 minutes for the Hawaii State Government to tweet an atomic attack on the island was a false alarm, even though the original reverse 911 message popping up on every single mobile phone, tourists, residents connected to a Hawaii based mobile phone tower signal.

An hour and a half after literally everyone in Hawaii was in a state of panic no one from the Governor’s office, the Emergency management service or the police made any public statement. Most 911 systems appear to be still down.

Hawaii has been mentioned as a target for a possible nuclear threat together with Guam many times, and sending such a message out and not immediately clarifying and retract this situation shows the level of preparedness this U.S. state civil authorities may be to deal with a serious and threatening situation.  Hawaii has a responsibility not only for their residents but also for tens of thousands of tourists from all over the world.

This Saturday morning may have long-lasting effects on the livelihood of the island’s economy- the travel and tourism industry.  If a system can make such mistakes this system needs to change immediately.

The people of Hawaii are waiting for an answer at this time – so are the visitors trying to enjoy the Aloha spirit and who came to Hawaii for some harmony and the beautiful sun and beaches.

UPDATE: At 10.07 am Hawaii Governor Ige told citizens someone pushed the wrong button. He apologized and said he would make sure this can never happen again.

Message on the Civil Defense network 38 minutes after people were driving around for a shelter, unfortunately, such shelters are not available.