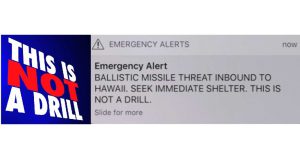 Hawaii Emergency Management Agency Administrator Vern Miyagi has resigned, and the employee that sent the incoming ballistic missile alert in error has been fired. The internal investigation revealed that the message was not sent in error but was purposely sent.

Hawaii State Adjutant General Major Gen. Joe Logan issued this statement today after the results of their internal investigation. A second state worker resigned instead of waiting for disciplinary action that would follow, and a third worker has been suspended without pay.

The Federal Communications Commission stated that the employee who actually pushed the alert button, believe an imminent attack was real. What caused the confusion is based on a mistake in how the drill was initiated during a shift change.

A number of missteps occurred after that, causing Hawaii residents and tourists to believe they had only 15 minutes to prepare for an attack by an incoming missile.

When an imminent attack is real, there is no requirement for an employee to double-check with a colleague or get a supervisor’s approval before sending the alert blast to cellphones, TV and radio stations statewide.

“There were no procedures in place to prevent a single person from mistakenly sending a missile alert” in Hawaii, said James Wiley, a cybersecurity and communications reliability staffer at the FCC.

Adding to the confusion, the emergency agency did not have any preparations in place on how to correct a false alert. Compounding that scenario, software at Hawaii’s emergency agency used the same prompts for both test and actual alerts, using prepared text to make it easy for a worker to click through the alerting process.

The state Emergency Management Agency now requires more supervision of drills and alert and test-alert transmissions and has also created a correction template for false alerts. According to the FCC, the agency has stopped ballistic missile defense drills until its own investigation is done.