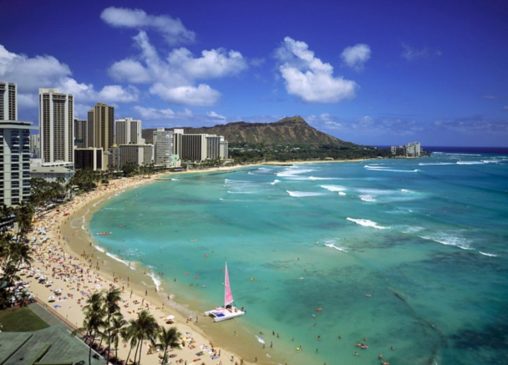 Sun and sea destinations abound around the globe, but time and time again, the Aloha state of Hawaii ranks at the top for chosen ocean holidays.

Hawaii hotels statewide recorded the highest revenue per available room (RevPAR) and average daily rate (ADR) of the top U.S. markets in the first six months of 2018, according to the Hawaii Hotel Performance Report released today by the Hawaii Tourism Authority (HTA).

HTA’s Tourism Research Division issued the report’s findings utilizing data compiled by STR, Inc., which conducts the largest and most comprehensive survey of hotel properties in the Hawaiian Islands.

The strong, across-the-board performance raised the Hawaiian Islands’ RevPAR to $229 and earned a number one nationwide ranking when compared to other top U.S. markets for the first half of 2018. New York City followed at $205, with San Francisco/San Mateo at $192 (Figure 2). Hawaii also led the top U.S. markets in ADR at $280, again followed by New York City at $241 and San Francisco/San Mateo at $236 (Figure 3). Hawaii ranked second nationally for occupancy at 81.7 percent, trailing New York City at 85.2 percent and being on par with Orlando, FL1 (Figure 4).

“For Hawaii to earn the number one ranking in the U.S. in both RevPAR and ADR as the market is rising nationally is a significant achievement for the state,” said Jennifer Chun, HTA tourism research director. “Most U.S. markets reported RevPAR growth in the first half of 2018. Very few markets were down compared to a year ago.”

Chun commented, “The Hawaiian Islands enjoyed the highest RevPAR and ADR over the first six months of the year since the inception of STR’s survey. Every class of hotel property and each island county reported increases in RevPAR. Maui’s performance was very strong with Wailea being exceptional. The island of Hawaii benefited from five good months to begin the year, which offset a downturn in occupancy during June while Kilauea volcano was continuing to erupt.”

“Statewide RevPAR and ADR this June were the highest ever for any month of June,” said Chun. “That is noteworthy considering how Kilauea volcano negatively impacted RevPAR and occupancy on the island of Hawaii. However, the overall performance of Maui County, Kauai and Oahu more than compensated for these declines. Waikiki and Wailea were full during June with occupancy of 88.2 percent and 89.6 percent, respectively. The success of these regions helped lift up the state.”

Hotels on the island of Hawaii felt the effects of Kilauea volcano’s continued activity in June, however, the 33-room Volcano House, located in Hawaii Volcanoes National Park, is the only hotel closed due to this impact. RevPAR for the island of Hawaii dropped to $163.91 (-8.3%) in June. While the ADR of $239 (-0.3%) was similar to a year ago, occupancy declined to 68.6 percent (-6.0 percentage points). Hotel properties in the Kohala Coast resort region also experienced a drop in RevPAR to $214 (-13.3%) in June. While a small increase in ADR to $335 was realized (+1.0%), this was more than offset by a decline in occupancy to 63.9% (-10.6 percentage points).