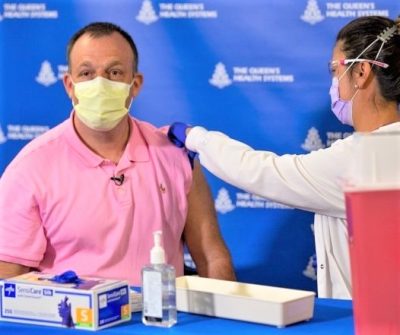 Lieutenant Governor Josh Green announced yesterday that Hawaii vaccine centers will soon be opening on the island of Oahu. The phased vaccination plan remains in effect based on an order that follows guidelines from the US Centers for Disease Control.

The state will offer immunizations at Pier 2 on Monday, January 18, 2021, and with The Queen’s Medical Center to operate a large-scale vaccination clinic a week later at the Neal S. Blaisdell Center. This mass vaccination effort is being done in a public-private partnership between the state and Hawaii Pacific Health, parent company of Kapiolani Medical Center for Women & Children, Straub Medical Center, Pali Momi Medical Center and Wilcox Health on Kauai.

If all those in Phase 1 receive the vaccine, 73% of Hawaii’s population will have received the vaccination. Phase 2 will cover the remaining 27%.

As of Monday, January 11, 2021, nearly 39,000 residents had been vaccinated, and 109,250 doses were delivered by Pfizer and Moderna. More vaccines are expected to be shipped later this week, according to the State Department of Health

It is expected that the federal government will approve two new vaccines by Johnson & Johnson and AstraZeneca, which could double the number of vaccinations Hawaii receives to 300,000 beginning in March.

Residents will be able to sign up for vaccines at hawaiicovid19.com. The state expects to release details on the registration process on Friday, January 15, 2021.

According to Lt. Gov. Green, by July 4, “everyone who wanted a vaccine would have gotten one.”