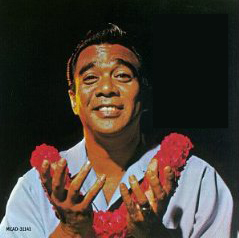 HONOLULU, HAWAI`I: MAY 21, 2018 – A free event honoring the musical legacy and memory of “The Golden Voice of Hawai`i” Alfred Aholo Apaka will be presented from 7:00-8:00 PM on Saturday, May 26, 2018 in the ground floor Pualeilani Atrium at the Hyatt Regency Waikiki hotel.

The now legendary Alfred Apaka died of a heart attack in 1960 at age 40.

“After Kuuipo Kumukahi phoned me from the Hyatt to ask if I would stage a Waikiki by Moonlight program to honor my dad, I got right on it. Portraying Hilo Hattie is the fabulous Hawai`i vocalist and Broadway singer Cathy Foy. I loved Aunty Clara (Hilo Hattie) because she and Dad were regulars on Harry Owens TV Show in LA. Her full name was Clarissa “Clara” Haili.

“Don Ho’s widow Haumea Ho will dance hula to a favorite of mine, I’ll Remember You, composed by Kui Lee. Many years ago while standing together at dad’s tomb, Don said, ‘You know, you should honor your dad somewhere every year’ and I’ve done my best to do that.

“I also invited Angel Pablo who was with Don’s Show. I will always remember Angel walking around Don’s audiences looking for singers to go on stage. He asked many people night after night; “Can you sing for me “Oh I wish I was an Oscar Meyer Weiner”? Those who could carry a tune were brought up on stage with Don!

“Three of Dad’s original dancers will be joining us on stage. The Lovelies are Kuulei Jefferies, Sally Fo (sister to Buddy Fo) and Wailani Bell. They’ll do separate hula that dad did. They are very special friends of mine because when I was small, they were all under 16 and had to have a parent as a guardian because liquor was served! They are all still lovely hula maidens!” 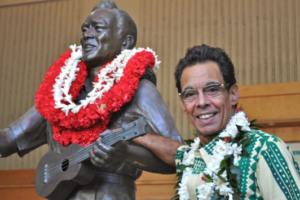 Should you wander through the Tapa lobby of the Hilton Hawaiian Village Waikiki Beach Resort in Waikiki, you’ll find a life-size bronze statue honoring the legendary Hawaiian romantic baritone, Alfred Aholo Apaka. During the statue’s dedication in 1997, long-time family friend, the late Gladys Brandt said, “His ability to render a Hawaiian melody was unduplicated for the time, and perhaps forever.”

Before Don Ho there was Alfred Apaka, “The Golden Voice of Hawai`i.” During the 1940’s and 50’s, Apaka was Hawaii’s most famous entertainer and his show was a “must see” for all visitors. Apaka was indeed the most influential local performer of his time, setting the standard for all modern Hawaiian music. His voice, masculine good looks and personality truly helped put Henry Kaiser’s Hawaiian Village Hotel on the map. George Kanahele, a critical observer of Hawaiian music later wrote, “Alfred Apaka possessed one of the most remarkable voices to ever come out of Hawai`i.”

Born into a musical family, Apaka literally came from Hawaiian royalty. His great-aunt, Lydia Aholo, was an educator and the daughter of another great Hawaiian musician — Queen Lydia Lili‘uokalani. Apaka’s son, Jeff, also a fine musician, says of his father, “I like to think that dad’s musical training came in a direct line from the Queen.”

Alfred Apaka’s father, Alfred Sr. was himself an accomplished musician and later recorded with his son, Jeff’s father, for Capitol records. Alfred Apaka’s great talent eventually landed him a spot as a featured singer on the famed “Hawai‘i Calls“ radio broadcasts — and then came regular shows with the Moana Serenaders at Waikiki’s Moana Hotel.

From the Moana, he moved to Don the Beachcomber’s where in 1952, Bob Hope “discovered” him. Appearances on Ed Sullivan’s prestigious Talk of The Town and The Dinah Shore Show followed giving national television exposure for both Apaka’s golden voice and for Hawai‘i.

In Hawai`i, Apaka was best known for his lavish shows in the Hawaiian Village’s Tapa Room and later in the property’s enormous gold aluminum geodesic dome constructed by Kaiser to accommodate Apaka’s large crowds. As his fame grew, he became a well known recording artist, spreading the appreciation of Hawaiian music to the world. Apaka was planning his own national television special at the time of his unexpected heart attack and death at the age of forty in 1960. He was buried with a microphone in his hands.

In 1997, Alfred Apaka was honored by a prestigious Nā Hōkū Hanohano Lifetime Achievement Award and in 1999 with an album, Lost Recordings of Hawai‘i’s Golden Voice. Former “

This Week Magazine publisher Ron Cruger once wrote: “Because Hawaii is a land far removed from all others, the most distant populated place on earth, the people of Hawaii hold on to their traditions – their history and their dreams. The splendid voice of Alfred Apaka remains in the memories of the Hawaiians. His magical voice filled the sweet Hawaiian air with thoughts of love and dreams of what could be. When Apaka sang a hush fell over those listening. Most had never heard such beauty weave through the air. It was romantic and strong. It made you dream. Hawaiians hold close to their hearts the feelings and the sounds of Alfred Apaka’s music.”

Son Jeff Apaka noted, “Somehow, the romantic hapa haole music of Hawaii’s golden era of entertainment that once captivated and enthralled the world has been lost. My great hope is that the music my father once sang – the classic music that exemplified Aloha, that set Hawai`i apart from the rest of the world and attracted so many to visit – will someday be heard again in the empty showrooms of Waikiki.”

The guests and performers then moved to the Tapa Bar to continue the celebration performing many of the songs made famous worldwide by Apaka.

Jeff Apaka noted, “Somehow, the romantic hapa haole music of Hawaii’s golden era of entertainment that once captivated and enthralled the world has been lost. My great hope is that the music my father once sang – the classic music that exemplified Aloha that set Hawai`i apart from the rest of the world and attracted so many to visit – will someday be heard again in the empty showrooms of Waikiki.”

It has been nearly 60 years since Alfred Apaka lef us yet his music and the memory of his artistry live on.