Hawaii’s beautiful State Convention Center was officially dedicated on October 15, 1997, after many years of debate and political intrigue. At the time, I was on Governor Ben Cayetano’s staff helping to advance the project in the midst of a major economic downturn when the location was finally selected and the land purchase took place.

Comparing it to Central Park in New York City, the visionary Governor Cayetano proposed that the Ala Wai golf course be repurposed as a park and the Convention Center constructed there but the golfers organized and that idea was “dead on arrival.”

The story of how and from whom the land at the corner of Kalakaua Avenue and Atkinson Drive was finally acquired is a long story of its own and I’ll leave that saga for another day. Suffice to say, the owner first sold the land to one of his own companies at an inflated price and that company attempted to resell it to the state at an even more inflated price. As I recall, The land had been badly contaminated by petroleum products from its earlier use as an automobile service station and that added to the initial construction costs. 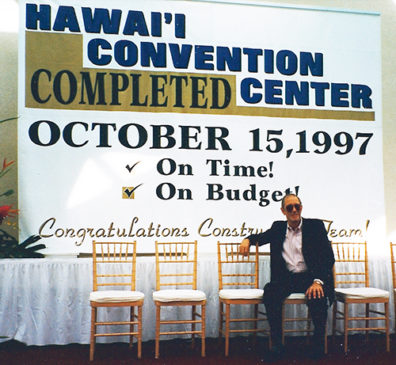 Finally, on time and on budget, on October 15, 1997, there it was in all its glory and Hawaii’s Convention Center truly is an architecturally wonderful building. But has it served its intended purpose and should it have been built in the first place?

In the following analysis, James Mak, Research Fellow and Emeritus Professor of Economics at the Economic Research Organization at the University of Hawaii (UHERO) takes a look at the numbers and the reader must decide for themselves. One item that Dr. Mac didn’t touch on are the future costs of the massive structure’s deferred maintenance and the alleged ongoing Black Mold problems.

As our readers know, we’ve been a longtime critic of the how the Hawaii Tourism Authority has conducted business and awarded contracts to insiders and friends which the February 2018, State Audit spelled out in very simple terms.

One very wise decision HTA did make was in 2014 when they awarded the Convention Center management contract to AEG Facilities which is the best in the business. If AEG can’t increase the facility’s bookings, no one can and that may be the reality. Or could AEG have been micro-managed by HTA? Perhaps the next state audit can look into that. – Scott Foster

June 4, 2018
Is the Hawaii Convention Center Profitable?
By James Mac, Research Fellow and Emeritus Professor of Economics at the Economic Research Organization at the University of Hawaii (UHERO)

Posted In his testimony before the House Committee on Tourism on February 13, 2018, Hawaii Tourism Authority (HTA) CEO George Szegeti said “In CY2017 the convention center turned a net operating profit of $1.1 million, marking its second consecutive year of profitability.” This is surprising news, indeed. Convention centers in the U.S. are not designed to make a profit. So what explains the Hawaii Convention Center’s (HCC) remarkable and atypical success? It depends on what one means by “profit.”

The Convention Center Advisor (CCA) notes that for convention centers profit is a fungible concept. Sometimes it is “expressed as you may see it in a public corporation’s annual report. Sometimes it is expressed where revenues include unearned income (such as a government contribution, normally a hotel tax).” CCA argues that the appropriate way to measure a convention center’s performance is EBITDA, defined as earnings before interest, taxes, depreciation, and amortization. This would leave out unearned revenues, including any hotel tax subsidy. What is left is a measure which shows whether earned revenues can cover operating expenses. If not, how much subsidy would be required to make up the difference.

Let’s look at the FY 2017 annual financial statement for the Hawaii Convention Center as published in the 2017 HTA Annual Report to the Hawaii State Legislature.

In an interview with the Honolulu Star Advertiser (12/24/2017), Marc Togashi, HTA vice president of finance, attributed the reduced debt service payments to “Complications relating to the state’s purchase of the Turtle Bay conservation easement” that “reduced HTA’s statutory funding by $6.5 million annually” and left HTA “without sufficient funds to pay the full $26.4 million obligation while also ensuring the Hawaii Convention Center had adequate funds to operate.” Thus, state subsidy is essential to the continued operation of the convention center.

In determining the profitability of an investment, economists include both operating and capital costs. If convention center capital costs (=interest + depreciation) were included, the annual deficits would be much higher than those displayed above.

The fact that the Hawaii Convention Center loses money like other convention centers in the U.S. doesn’t mean that it was built following a hasty decision. As I wrote in my 2008 book (Developing a Dream Destination… p. 126), HCC was not “born out of a sudden fit of ‘irrational exuberance.’ The State went into it after years of deliberation.” It was not motivated purely by civic pride. Hawaii’s economy was in the doldrums during the 1990s. Leisure travel was slowing down, and the State wanted to promote convention tourism to complement leisure travel.

The State’s initial goal for the convention center was to attract large convention groups to the Islands to diversify Hawaii’s economy and spur economic growth. At the planning stage, potential convention bookings and attendance, thus economic benefits, were greatly exaggerated. Its final environmental impact statement (dated July 1995) envisioned the convention center to reach its operating capacity by 2004-2006; by then it was projected to host 60 events per year with an average attendance of 6,200 to 7,500 delegates. Instead, in 2004, the convention center booked 39 events with an average delegate count of 3,300. In 2005, HCC booked 46 events with an average delegate count of 3,829; the corresponding numbers for 2006 were 37 events and 2,626 delegates. HTA’s 2016 annual report to the Legislature showed that it had 20 definite bookings for the year with an expected delegate count of 56,540 for an average attendance figure of 2,827. The initial goal has not been achieved.

Did HCC spur convention tourism in Hawaii? Before the convention center was officially opened in 1998, the number of convention visitors averaged 259,078 per year from 1990-1997; from 1998 to 2017, the number of convention visitors averaged 267,954 per year. Counting all meetings, convention and incentive (MCI) visitors, the average MCI visitor number per year was 445,706 before 1998 and 461,675 after HCC was opened. While there are many factors that explain the ups and downs of the convention business—and it is an extremely volatile business—these numbers paint a sobering picture of the impact of HCC on convention tourism in Hawaii.

With disappointment growing, HTA changed the convention center management company from SMG Hawaii to AEG Facilities starting January 1, 2014. The challenge ahead is steep. With leisure tourism booming in Hawaii driving hotel room rates up to the highest levels in the nation, it will be difficult to convince convention planners to hold their meetings in Honolulu. And competition from other convention centers is fierce. According to Heywood Sanders, a leading expert on U.S. convention centers, in 2000 there was 52.1 million square feet of convention space in the U.S.; by 2016 that number had risen to 71.2 million square feet. There is simply too much convention center space around the country. Yet, the Washington State Convention Center in Seattle is about to embark on a $1.6 billion expansion project that would double its current space. New convention centers or expansion of existing ones are in the works in Oklahoma City, Albany (New York), Los Angeles Convention Center, Laredo (Texas) and by Caesars Entertainment in Las Vegas.

The 2018 Hawaii State Legislature finally changed the way HCC is funded. HB2010 HD1 SD2 CD1 relieves HTA’s obligation to repay the remaining debt on the convention center, saving HTA $26.4 million annually to 2027. It reduces the amount of TAT revenues allocated to the convention center enterprise special fund each year from $26.5 million to $16.5 million. In sum, the Hawaii Convention Center remains a subsidized facility and will no doubt remain so over its economic life.

Debt forgiveness does not mean that the capital cost of the convention center can now be ignored in determining the profitability of the facility. Nonetheless, it would still be an admirable feat if HCC is only able to cover its annual operating costs with its own (earned) revenues. That has not been achieved thus far. That’s o.k. as long as residents want to have a world-class convention center and are willing to subsidize it.

(I thank Paul Brewbaker and Frank Haas for their excellent comments on an earlier draft. All omissions and errors are mine.)

UHERO BLOGS ARE CIRCULATED TO STIMULATE DISCUSSION AND CRITICAL COMMENT. THE VIEWS EXPRESSED ARE THOSE OF THE INDIVIDUAL AUTHORS.