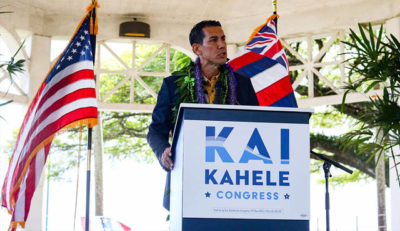 “It is with great pride and honor that I announce that the LGBT Caucus of the Democratic Party of Hawaii, Hawaii’s largest and oldest LGBTQIA+ political organization, has voted unanimously to endorse Kai Kahele’s congressional campaign.” said Michael Golojuch Jr chair of the LGBT Caucus,

“The battle in the state of Hawaii to keep the US House Representatives in the Democrats hands begins with the election of Kai Kahele for the 2nd Congressional District.

Kai has been a stalwart ally and advocates for Hawaii’s LGBTQIA+ community during his entire time in the Hawaii State Senate.

We look forward to Kai bringing this same passion and advocacy to the US House of Representatives. We encourage everyone that backs justice and equality for all of us to support Kai Kahele’s campaign and all voters in Hawaii’s 2nd Congressional District to cast their vote for Kai Kahele.”

I want to personally mahalo all of you who voted in Hawai‘i’s Primary Election and made your voices heard.

Having just returned from active duty with the Hawai‘i National Guard in response to COVID-19, I’ve seen firsthand how people across our state are struggling during this pandemic. They’re worried about their health, their jobs, our schools, our future and the economy.

I’ve also seen our first responders, healthcare professionals, teachers and parents, and all of you who have stepped up during this crisis. Mahalo for your dedication and sacrifices.

I am deeply honored and humbled to receive the Democratic nomination for Congressional District 2. My campaign team and I will continue to work hard in the General Election, and if I am elected, I will work with our Congressional Delegates and leaders to address the unprecedented challenges our communities face and bring us the resources we need to recover. We will get through this – together.

Mahalo to our supporters, donors and volunteers for standing with us on this journey as we work together to move Hawai‘i forward.