More of The Same For Hawaii Tourism? 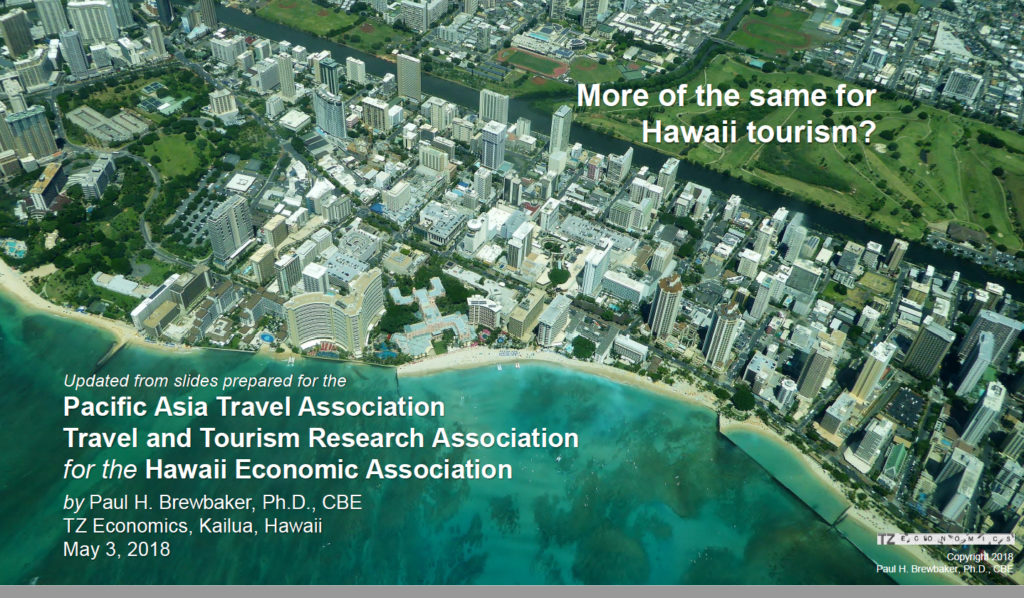 Noted local economist Dr. Paul Brewbaker was the guest speaker at the August, 2018, Hawaii Tourism Wholesalers Association meeting. A graduate of Stanford University and the University of Hawaii, Brewbaker is the Principal of TZ Economics, a Hawaii economics consultancy. His background in research on the Hawaii economy and financial risk analytics stems from a 25-year affiliation with Bank of Hawaii, concluding as its Chief Economist.

The Hawaii Tourism Wholesalers Association (HTWA) works to network wholesale Hawaii gift and souvenir manufacturers and wholesalers with others working in the Hawaii visitor industry. More about HTWA HERE. 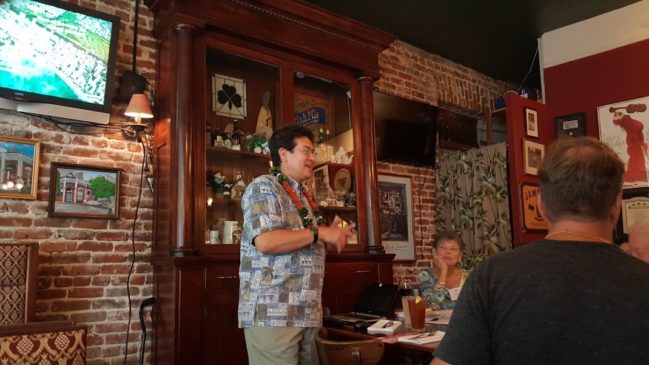 Paul’s program was, “More of the same for Hawaii tourism?” which was partially based on a May 2, 2018, presentation to the Hawaii Economic Association (HEA) which I had attended. My eTurboNews article on that event is HERE.

This distinguished group has been meeting for several months and is hard at work to help transform and refocus the Hawaii Tourism Authority and their $85+ million annual budget from marketing Hawaii to managing the negative effects of overtourism now impacting our tiny state. Frank Haas had been the July HTWA guest and my eTurboNews review of his solo presentation from a marketing perspective is HERE.

As the HTWA meeting began, Paul noted that three of the gang of four’s recent meeting with Governor Ige to present their ideas was “only the second time in 30 years” he had been invited to such a meeting on tourism with a governor. His previous meeting had been with Governor Ben Cayetano in the 1990s. Given the current situation, this makes one wonder where Hawaii’s elected officials get actionable economic tourism information – outside of their isolated political silos.

Having known Paul Brewbaker for over two decades, I was familiar with the potential ramifications of his assertion about Hawaii government’s failure to permit more destination hotels to be built. The results of his Cassandra warnings are now obvious to all concerned. 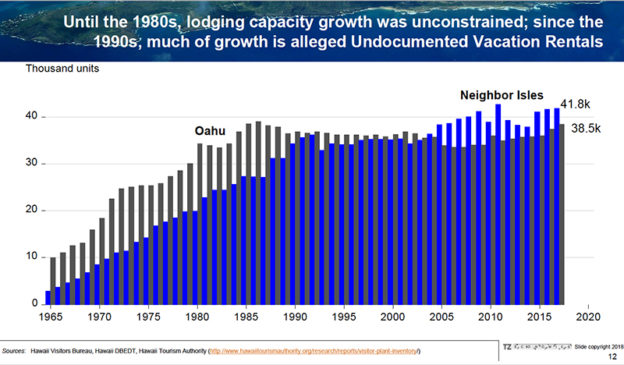 Today, with the existing hotels often operating at near capacity, the recent arrival of the AirBnB technology has given rise to many of Hawaii’s more desirable neighborhoods finding themselves with close neighbors renting rooms to help pay their mortgages and many wealthy out-of-state investors buying multiple residential properties and renting the entire houses as very lucrative short-term visitor lodgings.

This has created a perfect storm with once-tranquil neighborhoods being overrun with noise and parking problems and the AirBnB rentals contributing to the dire shortage of affordable rentals which add to our homeless crisis. The failure of county and state government to tax and regulate such properties continues to anger the electorate and the fact that many visitors are preferring to stay in AirBnB properties instead of hotels is adding to the dilemma. It’s also changing many visitor’s buying habits.

Paul Brewbaker’s current public presentations include the following specifics as detailed in a recent handout:

1. For most of the twentieth century tourism contributed to economic growth in Hawaii, until 1989.

2. Since 1989 tourism in Hawaii has not been a net contributor to economic growth. Today, tourism in Hawaii is smaller absolutely in economic size (constant-dollar export revenue) and is smaller relatively in value-added contribution (GDP share) than in 1989, although it has generally been recovering during the early-21st century from late-20th century compression.

3. Real Hawaii tourism receipts in 2017 ($16.78 billion) were approximately $2 billion lower than in 1989 ($18.82 billion, in 2017 dollars). Meanwhile, numbers of Hawaii tourist arrivals have risen by almost 3 million during the same three decades, from 6.49 million in 1989 to 9.38 million in 2017. Total tourist days (arrivals times average stay length) have risen from 60 million to 83 million. Hawaii tourism’s physical footprint has expanded, but its real economic yield has not. “More visitors, not more dollars” is the outcome.

4. At current rates of increase in the 2010s, real Hawaii tourism export receipts may match, by 2019, those in 1989, but thirty years will have passed without any incremental economic benefit from tourism while the external costs of physical tourism volumes will have grown large enough to seriously erode public favor in the meantime.

5. Tourism economic performance in Hawaii has been impaired by short-term exogenous factors which constrain tourism export receipts even when volumes are growing. Currency depreciation, business cycle variations, behavioral and market-share shifts, and fat-tailed (leptokurtotic) event risks each, among other factors, have undermined sustained real Hawaii tourism export revenue growth from time to time. Moreover, as longer-term Hawaii tourism growth has slowed, volatility has not abated, implying that risk-adjusted returns have declined even before accounting for external effects.

6. Patterns of official denial and neglect have muddied the signal transmitted in tourism performance data, subverting public understanding of tourism’s nuances. For example, on the island of Oahu—comprising approximately half of Hawaii tourism—constant-dollar export receipts have not grown for the last five years (2012-2017). Yet, in Hawaii, officially, “every year is a record.”

7. For decision-makers, increasing absolute amounts of public expenditure, policy attention, and an accumulation of negative externalities (congestion, natural resource degradation, cultural dilution) have slow-cooked a toxic political stew, undermining possibilities for reform. Yet, in competing destinations, policy alternatives offer insights both on managing tourism’s negative side-effects and on enhancing its economic benefits. Global mobility has only increased: building a wall is not an option.”

Brewbaker noted that the overtourism Hawaii, “a mature destination,” is now experiencing could be better managed by viewing Hawaii as Disneyland, “except we don’t charge admission.” He suggests creating a Hawaii app which would use demand pricing for the more popular state parks and attractions. For example, Diamondhead currently charges only $5.00 per car, $1 per person for pedestrians, and Commercial vehicle fees (tour buses, etc.) are $10.00 for cars & vans, $20 for mini-buses and $40 per the larger buses. In other words, increase the entrance fees for the busiest times and reduce the fees during the slower periods. Senior and Kama`aina fees would remain.

Paul noted that demand pricing would require a much better use of collected data in order to manage the growing loads and that Hawaii is just “scratching the surface” of this potentially important management tool. 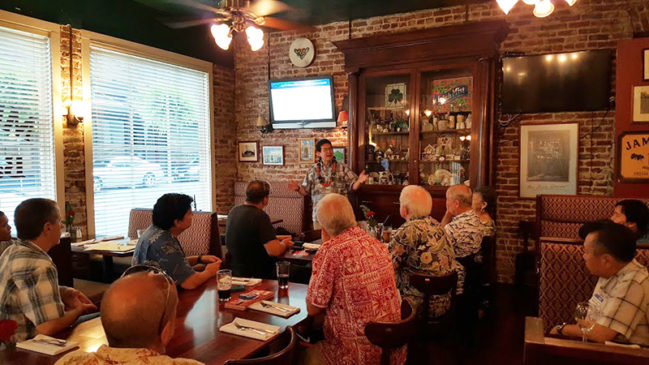 The effect of the very complicated Jones Act on Hawaii’s economy is a long-debated subject and Paul Brewbaker’s perceptions are somewhat at odds with many experts in the field. Paul believes that despite the much higher cost of Matson’s newer container ships, their elements of scale produce an efficient, dependable inflow of goods at a relatively small additional per item cost. However, the HTWA members who are able to compare their own container costs disagree. The differences of opinion will not be resolved soon but it’s worth knowing that the Republican Party is in the process of adding a plank to their national platform that could begin a real challenge to part of the Jones Act should the Republicans hold on to their control of Congress after the November 2018, elections. For a Jones Act 101, go HERE.

Paul’s presentation was not a dull offering of facts and figures and the packed room was frequently filled with laughter and applause due to his extraordinary sense of humor and he was gracious enough to stay an additional hour to talk story with several engaged HTWA members.

Paul did not dwell on all of his PowerPoint slides and you may study them on line HERE.