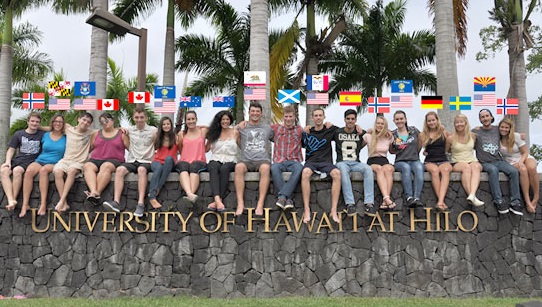 The state Department of Business, Economic Development and Tourism (DBEDT) released a report today which analyzes the impact of international students on Hawaii’s economy.

DBEDT’s Research and Economic Analysis Division (READ) made the estimates and prepared the report, while the Business Development & Support Division (BDSD) led the state’s efforts for international student exchange.

“The Economic Impact of International Students in Hawaii – 2018 Update,” shows the direct spending by foreign students in Hawaii was $241.5 million for the calendar year 2017.  This estimate includes the total living expenses and institutional tuition and fees.

“International students in Hawaii are an important part of our economy,” stated DBEDT Director Luis P. Salaveria.  “Students from around the world bring international perspectives into our classrooms, and often lead to longer-term business relationships and economic benefits.”

Dennis Ling, administrator of BDSD, which leads the program for international student exchanges added: “While nationwide, the overall number of international students studying in the U.S. declined, Hawaii’s numbers are holding steady thanks to our continued marketing. The department will continue to work with our education partners to attract more foreign students to our classrooms.”

The Study Hawaii consortium (studyhawaii.org) of 31 schools in Hawaii is the association promoting the industry and actively recruiting international students.

“Our members share a belief that increasing the flow of international students benefits our state and our communities socially, culturally and economically, and positions Hawaii as a preeminent nexus between the Asia-Pacific region and the world,” said Joel Weaver, president of the consortium.  “We are pleased that this latest survey demonstrates the considerable financial impact of the international education industry in Hawaii.  We look forward to continuing to partner with DBEDT to increase these benefits in the coming years.”

Including the ripple effects, the total economic impacts of international students are as follows:

Nationwide, foreign student enrollment declined in the most recent survey.  Hawaii’s numbers, however, show an increase since the last report for 2016.

The report is available here.