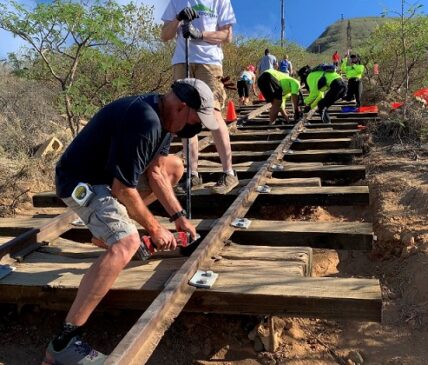 The City and County of Honolulu and the non-profit group Kokonut Koalition announced that an agreement has been signed to facilitate repairs to the Koko Head Crater Tramway. The tramway track and trestle structures have been widely utilized as a hiking trail, and the Koalition estimates that nearly 300,000 people utilized the tramway in 2019 to access the picturesque view from atop the summit.

The WWII-era tramway was constructed in 1942 by the US military to transport cargo and personnel up to the Koko Crater Summit which served as a radar station. The radar station was deactivated by the Air Force in 1947 and then the abandoned structures were turned over to the City and County of Honolulu in 1966. Upon deactivation, the Air Force removed equipment but left abandoned concrete and steel structures on the summit along with tramway track and trestle structures leading up to the radar station. Larger fixed equipment such as the tramway hoist were abandoned in place.

Due to significant public usage and weathering, the tramway and its 1,048 wooden ties have experienced significant erosion and degradation since the deactivation of the former military installation.

That same year, the Honolulu City Council and Mayor Caldwell’s Administration allocated $1 million towards long-term and immediate repairs to the tramway turned recreational resource. As part of that funding, nearly $74,000 was used in conjunction with the public-private partnership between the City and the Koalition to procure supplies for immediate repairs the tramway, with volunteer work providing the labor for the immediate tramway improvements.

“One of the downsides to having such amazing natural beauty and gorgeous weather year-round is that our public facilities tend to get loved to death,” said Honolulu Department of Parks and Recreation Deputy Director Michele Nekota. “While the tramway was not intended to be a public recreational hike, the community has made it clear that this summit access is a resource they want to maintain. I am pleased to be able to support their enthusiasm towards improving this amenity so that many more generations can enjoy it.”

Now volunteers from the Koalition are inviting members of the public to assist with this community effort to revitalize this popular hiking location.

“Many hands working together make for light work,” said Kokonut Koalition President David Nixon. “I want as many people as possible to be able to point up at that mountain and say, ‘We fixed that, and I helped.’ It’s going to be a fantastic community project which will help make the climb a little safer, slow the soil erosion, and buy us some time while a more permanent solution is developed.”

The Koalition has also developed an interactive tramway map for the public to keep track the repairs. You can access that map by following this link: https://shorturl.at/jAMY7.