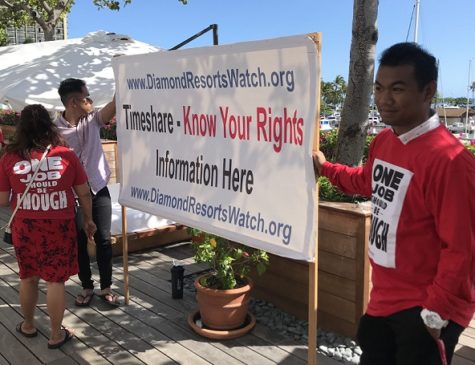 The Modern Honolulu recently notified 78 workers—nearly 30% of the workers at the hotel—that they will be laid off within the next 30 days. Federal charges assert that The Modern violated employees’ federal labor law rights and refused to bargain in good faith with the union.

The collective bargaining agreement expired in December 2018, and the Union and Hotel are in the middle of negotiating a new agreement. The Hotel did not mention these layoffs in the most recent negotiating session, and then it cancelled the session scheduled in mid-April. Management initially alerted the workers about the layoffs by calling them into one-on-one meetings and refusing to allow the Union to participate in those meetings.

The layoffs impact multiple departments like housekeeping, banquets, pool, in-room dining, reservations, and food & beverage. The 78 workers received a letter from the company notifying them of the layoffs. Local 5 represents over 270 workers at The Modern Honolulu. Workers outside of the Local 5 bargaining unit have also been notified of layoffs, so it is unclear what the total number of workers being laid off is. Diamond Resorts purchased The Modern in April 2018.

This is the latest in a string of negative issues impacting Diamond Resorts. Diamond Resorts has been accused of unethical high-pressure sales tactics for years, including preying on the elderly, which has resulted in a number of lawsuits against the company. In 2016, the State of Arizona investigated Diamond Resorts for violating the Arizona Consumer Fraud Act after receiving hundreds of consumer complaints against Diamond Resorts. In March, Diamond Resorts failed to issue paychecks to The Modern workers on time, resulting in workers incurring fees and penalties.

The Modern is a full-service hotel, but Diamond Resorts has expressed interest in partially or fully converting the property into a timeshare. They also plan on cutting guest services like daily room service, banquets, meetings, and catering. However, they have not received timeshare registration approval from the Department of Commerce and Consumer Affairs or the permits needed to build or renovate hotel rooms into timeshares, so it is unclear why this layoff is necessary at this point.

Local 5 has been saying for many years that timeshares have a negative impact on workers, guests, and the state. Timeshares pay less than hotels for more difficult work, and they provide less jobs. They negatively affect the guests’ experience in Hawaii by charging exorbitant maintenance fees while cutting guest services like daily room cleaning.

Local 5 is continuing to look into its legal options. Workers at The Modern are ready to take action. “We want jobs, not severance packages. I take pride in my work and want to continue working in our tourism industry. Workers at The Modern are going to organize and do whatever it takes to make one job enough to live in Hawaii and to stop Diamond Resorts from taking away good jobs from us,” says Jack Krause, a pool bar attendant at the Modern and one of the 78 workers who will be impacted by the layoffs. The Union and Employer are scheduled to meet for contract negotiations later this month.