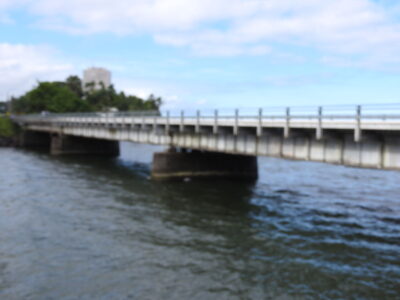 The Hawaii Department of Transportation (HDOT) announced that the emergency repairs on the Wailuku Bridge, also known as the Singing Bridge, located on Hawaii Belt Road (Route 19) between Waianuenue Avenue and Pukihae Street on the island of Hawaii, have been completed.

Traffic flow on the bridge for both Honokaa and Hilo bound travelers was restored as of 10:30 a.m. today, Friday, January 8.

The need for the emergency repairs to the makai bridge girders (i.e., the beams supporting the deck) was found as crews worked on spall repairs to the deck of the bridge in September 2020. The structural repair work is now complete and the final painting of the girders is scheduled to be finished by the end of this month. The previously announced closures and Hilo bound detour via Wainaku Drive are no longer necessary. The water of the Wailuku river flows on the left of the bridge, and the Pacific Ocean is on the right.

The Wailuku Singing Bridge earned its name, because the bridge deck is made of a steel grid which creates a singing sound from the tires of cars driving on it. Built in 1950, the bridge replaced a three-span Warren railroad bridge at the same location. Two of the spans were reconfigured as an automobile deck truss crossing Kolekole Creek.