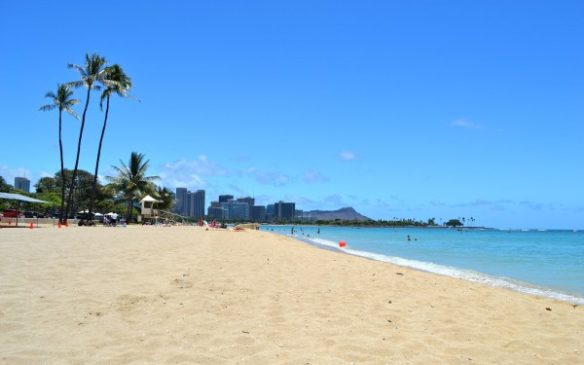 This effort begins with the selection of two Energy Service Company (ESCO) partners to assist the City in becoming more energy efficient, while saving taxpayer dollars and boosting clean energy jobs during the COVID-19 economic downturn.

The City announced Johnson Controls, Inc. (JCI) was recently awarded a preliminary contract for City-wide facilities and operations, while NORESCO was chosen as the ESCO for an effort specifically directed at the City’s 303 park locations.

“From the beginning of our administration I have strived to improve not just our physical spaces but also the way we manage them,” said Mayor Kirk Caldwell. “This initiative will continue to improve our facilities and parks and reduce our impact on our precious ‘āina for decades to come. It makes fiscal sense, by saving energy and creating jobs, and more importantly it makes environmental sense to look at every option available to make City operations more sustainable and resilient.”

As part of the contracts, these ESCO’s are already surveying City sites and facilities on a daily basis looking for energy-related improvements to present to the City. These improvements can potentially create millions of dollars in energy savings across hundreds of locations on O‘ahu.

The goals of the improvements are to:

•             Improve the quality and consistency of performance for all facility users in terms of lighting, irrigation, air conditioning, and other infrastructure that park users and residents rely on.

The ESCO’s are tasked with performing an investment-grade audit to determine the best options and processes for reaching the above goals. In addition, with yielding immediate and future benefits to the public, these options won’t actually be funded by City coffers. Instead, they’ll be funded by future energy savings (calculated over several years), creating a win/win for current and future taxpayers.

For example, in their initial proposal for energy improvements NORESCO outlined projects that could yield over $50 million of energy and operational savings over a 20-year period for the Department of Parks and Recreation (DPR) alone. These figures provide an idea of the financial benefits to taxpayers, which may vary depending on the improvements selected from the audit.

DPR staff worked with members of the Department of Budget and Fiscal Services and the Office of Climate Change, Sustainability and Resiliency to help draft the proposal which led to the selection of NORESCO.

“As stewards of our parks and natural areas, it is imperative that we focus not just on maintaining our facilities, but improving them so that they contribute to a healthier, greener tomorrow,” said DPR Director Michele Nekota. “I am so proud of all of the involved City staff for researching and working diligently to put together this proposal and coordinate the selection of NORESCO. I am confident this group will make us more efficient and sustainable while saving money and improving our facilities.”

Working in tandem, the Department of Design and Construction (DDC) and Department of Facility Maintenance collaborated with other City partners to pull together a broader initiative to cover other City facilities beyond parks.

“After the successful completion of the island-wide LED Street Light Conversion project, the DDC is eager be working with JCI again on this City-wide effort,” said DDC Director Mark Yonamine. “JCI will be tasked with auditing public building facilities, corporation yards, police & fire stations, and other enterprise facilities.”

Collaborative solutions have emerged as an important tool to drive up efficiency, drive down costs, and tackle climate change.

“We have seen over and over again that the cities with resilient economies tend to be the ones that are most efficient and on the cutting edge with renewable energy technology,” said Josh Stanbro, the City’s Chief Resilience Officer. “This initiative is going to support local green jobs in a time when they are sorely needed, upgrade our parks at a time when our outdoor spaces are critical, and save taxpayer dollars as budgets tighten—we’d much rather be spending City funds on human services than paying for wasted energy.”

Yesterday, the American Council for Energy-Efficient Economy (ACEEE) announced that Honolulu has risen six slots in its national 2020 City Clean Energy Scorecard. Honolulu moved from #47 in 2019 to #41 in the 2020 national survey of 100 major cities in the United States. The work of the ESCOs aims to continue that momentum towards improved energy efficiency, an effort which will also qualify the City for additional financial incentives from Hawai‘i Energy, the state’s ratepayer-funded energy conservation and efficiency program.

“We commend the City and County of Honolulu for taking action to reduce costs, reduce carbon emissions and spur economy activity during this challenging time,” said Brian Kealoha, Executive Director of Hawai‘i Energy “ Hawai‘i Energy will provide technical assistance and financial incentives to help ensure these are successful projects.”

The cost savings of these ESCO efforts goes beyond long-term utility bill savings. Hawai‘i Energy provides immediate payments and incentives to encourage the adoption of energy efficient equipment and technologies and reward aggressive action such as the initiative announced today.  Hawai‘i Energy provided $1,945,904 in direct financial assistance to the City for an earlier energy efficiency project to replace all streetlights on O‘ahu with LEDs, protecting taxpayer dollars for other programs and badly needed services.