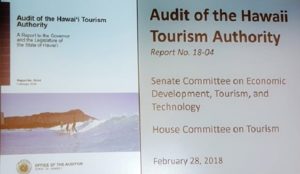 HONOLULU: While February 28, 2018 was windy, cold and wet outside of the Hawaii State Capitol, it was “hotter than the hinges of Hell” (and equally as windy) inside during a 2 1/2-hour joint House & Senate Tourism Committee “informational briefing” on the latest damning audit of the Hawaii Tourism Authority (HTA).

Only the day before, one local headline read, “State auditor blasts HTA for lax oversight and accountability.” Powerful men don’t much care to be questioned by anyone, much less by elected officials with subpoena power – but there they were, sitting in the hot seats in front of the very people who have full control over their little kingdom.

Hawaii State Auditor Les Kondo is one of the brightest lights in Hawaii state government, a real “no nonsense” professional who knows and understands every nuance of his complicated job, especially the Hawaii Revised Statutes (state law). His PowerPoint presentation was brief and to the point as he went over some of the many critical audit conclusions such as:

– “We found that HTA’s semiautonomy and its exemption from the State Procurement Code has led the Authority to be less accountable and less prepared, with operations that lack the rigor necessary to adequately manage and oversee its contracts, to ensure that procurement is conducted fairly, appropriately, and in the State’s best interest, and to address the statutory reduction of the limit on administrative expenses,” and

– “The Authority’s staffing has evolved over the years, we found that its policies and procedures have become outdated, no longer reflecting the reality of its current organizational structure.” 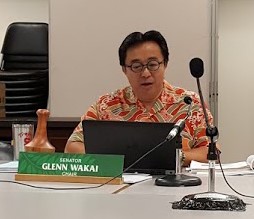 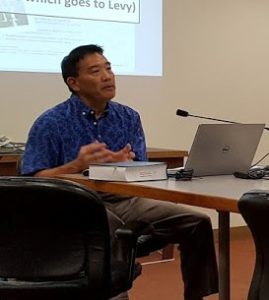 That was just for openers.

The first to question Auditor Les Kondo was Representative Issac Choy. Choy has announced that he’ll not be running again for his House seat and it was immediately apparent that, for whatever reason(s), he was defending the powerful HTA executives and

HTA Board Chairman Rick Fried, Esq. Fried is perhaps the most powerful trial lawyer in the state and has been on the HTA board long enough (5 years) to understand the nuance of the situation. Choy, a CPA, spent 30-minutes trying to convince Les Kondo that he didn’t know what an audit was. And then the fun really began.

This little article only sets the stage for a very interesting set of circumstances and characters which we will attempt to demystify over the coming weeks. Stay tuned as we crawl deeply into the rabbit hole of Hawaii’s single most important business organization, the Hawaii Tourism Authority and it’s $120+ million annual budget. With that kind of money (and male egos) involved, our story is far from boring. This I can promise you.