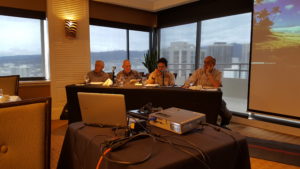 HONOLULU: MAY 3, 2018 — Many compelling recommendations and the research & reasoning behind them about marketing Hawaii were presented and discussed by four respected local economics and marketing veterans during a luncheon forum on Wednesday, May 2nd. The event was presented by the Hawaii Economic Association (HEA) at Honolulu’s Plaza Club and I was lucky enough to have a front row seat.

Obviously good friends, the four scheduled and began to collaborate on the presentation after the recent problems with the Hawaii Tourism Authority (HTA) became public to at least begin to formulate a succinct plan of action.

Part of the 2016 HTA mission statement reads, “… to strategically manage Hawai‘i tourism in a sustainable manner” and many do not believe this is happening as it could, should and indeed must.

I’ve barely touched the tip of the iceberg here and the following is from my written notes and the group’s excellent handouts. For a more thorough grasp of the issue, I’ve included a copy of the April 18, 2018, Civilbeat article by tourism marketing veteran Frank Haas: “Tourism Industry Needs Better Planning, Not Budget Cuts: The state needs to invest in marketing that strategically attracts the visitors who contribute to real economic impact.” It’s a basic primer on exactly what changes need to take place at HTA.

The HEA Web invitation reads, “The stress that tourism puts on local communities, social structures, and natural resources is increasing dramatically. Tackling these problems with the same old tactics may not be working anymore. This panel discussion will highlight the ways that tourism has reached a critical point in its development and suggests some shifts in thinking to respond to Hawaii tourism’s 21st century challenges.” 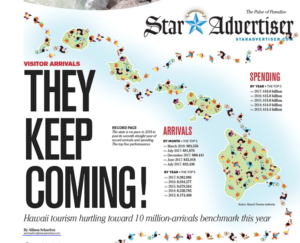 On a note of subtle humor during lunch was the projected image of the April 27, 2018, Star-Advertiser front page with the bold headline, “THEY KEEP COMING!” Haas later noted that he was concerned that language in the article such as “juggernaut” and “rampaging” gives the wrong perception of Hawaii’s vital tourism marketing. Aside, one sentence in the Star-Advertiser was, “The tourism juggernaut is the pride of HTA” (the Hawaii Tourism Authority).

Haas views the marketing of Hawaii as “a mosaic” and noted that the 2005-2015 HTA marketing plan he helped author contained nine key elements and “all had to be performed together in order for it to effectively work.” Haas noted that this has never happened as originally planned.

James (“Jim”) Mak was equally direct and to the point saying, “Overtourism is the very opposite of sustainable tourism; Overcrowding is bad for business; HTA must shift from tourism promotion to better management of tourism,” and “Hawaii residents want HTA to mind the store.”

Mac is one of the authors of the current research report “Ready or not, Hawaii is set for more growth” now posted on the Hawaii Economic Research Organization (UHERO) Web page <http://www.uhero.hawaii.edu/>. A free public summary pdf and a more in-depth paid version are there.

Economist Paul Brubaker is uniquely able to present columns of calculations in a humorous and informative manner; a rare talent. The following points are taken from Paul’s handouts:
– Hawaii tourism has yet to return to its absolute economic position of the 1980s (30 years)
– long-term political predisposition (since 1980) to restrain tourism capacity growth.
Aside, Brubaker’s comment “We can’t build a wall” brought down the house with laughter and polite applause.
– The strategic question for next generation is whether Hawaii’s only plausibly material export will return as a major growth engine or simply consume more public resources.
– More visitors, not more dollars.
– Paul contends there are fewer hotel rooms now in Hawaii than in the 1980s and attributes this to a variety of factors including condo and timeshare conversions.

John Knox’ handout and comments were particularly revealing. While somewhat differing from island to island, the results of a “Selected Hawaii Tourism Authority Resident Survey Question (2010-2017” conducted by the OmniTrak Group for the Hawaii Tourism Authority presents a clear picture of the public’s growing negative opinions about tourism. This informative document is on the HTA web site under “research.”

Frank Haas later said, “There are a myriad of longstanding issues that have been identified that are impacting Hawai‘i tourism. Identifying the issues is a critical first step, but the bigger issue will be developing structure and strategies that will lead to real solutions after years of neglect. Now that many of these issues are “on the table” it would be an opportune time to reconvene some thought leaders who can look outside of the conventional wisdom and find innovative solutions to these problems.”

With the recent groundswell of complaints about overtourism (visitor count now approaching 10 million a year) and the many negative impacts on Hawaii’s oceans, aina, drinking water, garbage disposal, waste water processing, crowded roads and highways, dirty beaches and with the many low paying jobs and our nearly hopeless affordable housing situation, a seeming groundswell of Hawaii residents are demanding some immediate changes.

Although the panel covered a lot of territory and presented many possible solutions during the 90-minute event, many of the approximately 80 attendees left wanting more. The group is being encouraged to tape a television broadcast in order to get their important observations and at least a few immediate solutions out to the general public, Hawaii’s elected officials including the governor, and to the new Hawaii Tourism Authority board of directors and their next board chair.

Like it or not, Hawaii remains dependent on a vibrant visitor industry and seemingly all the pieces of the mosaic are there — except the political will to change. All concerned have their work cut out for them on that point.

eTurboNews will continue to follow this important, evolving issue.

-###-
The following op-ed on tourism by Frank Haas was published by CivilBeat.org on April 18, 2018:
Civilbeat.org
Community Voice
Tourism Industry Needs Better Planning, Not Budget Cuts
The state needs to invest in marketing that strategically attracts the visitors who contribute to real economic impact.
By Frank Haas
Watching the evolution of Hawaii tourism over time has been like watching a kid grow up.

We’ve had our growth spurts. We’ve skinned our knees a few times. We’ve even had some awkward phases.

It seems that now we’re at that point where, like a middle-aged patient, we’ve scheduled an exam and the doctor says “you’d better take care of yourself.”

We probably need to go on a diet. Given all the angst in the media and at the Legislature about tourism, we probably need to lower our blood pressure, too. And like any patient looking to achieve “wellness” we certainly need to make some serious lifestyle changes.

What are the symptoms … and what do we need to change?

For one thing, we’re suffering from anemia. If you look at the performance of the visitor industry in terms of visitor days and arrivals and compare them to real (inflation adjusted) visitor spending, we find that we’re hosting a lot more visitors and not much — if any — increase in real economic impact.

Since 2005, visitor arrivals have grown 25.7 percent and visitor days have grown 24.1 percent while inflation-adjusted visitor spending has been about flat. In other words, impacts have increased but benefits haven’t.

We’ve said that we want to increase visitor spending faster than visitor arrivals, but that hasn’t happened yet.

Can that change? Yes. But only if we make substantial changes.

We know who high-spending visitors are — and they’re not just the rich. The meetings, incentive travel, bridal and honeymoon, LGBTQ, golf and other markets are known to be high spenders that are aligned with what Hawaii has to offer.
If marketing can be focused on significantly increasing the percentages of these groups in the visitor mix, it can impact real spending.

Many of these markets (certainly golf and bridal/honeymoon) have, in fact, declined or been stable as a percent of total visitors. Changing those dynamics will require significantly more investment.

We haven’t been good about taking our medicine. Chronic problems just seem to continue despite the frustrations they cause. Unlicensed vacation rental units have proliferated because we haven’t figured out how to manage them. Parks and hiking trails are degraded because of increased use.

Don’t Cut HTA’s Budget
We’ve addressed similar issues in the past, but only when they’ve become a crisis. The management plan for Hanauma Bay is a good example of how things can improve when we finally take action.

But, we need to be proactive to make the big changes to address these issues. Change is uncomfortable, but change is necessary.

Some have argued that we need to substantially cut tourism budgets in order to stem growth pains. Some in the industry argue that cuts will cause dramatic declines in visitor arrivals.

I believe both arguments are flawed.

If the Hawaii Tourism Authority budget is cut, visitors will continue to arrive in numbers, at least in the short term, because hotels, airlines and others in the private sector will continue to market themselves to fill seats and rooms. The difference will be that the state will no longer be a master of its own tourism destiny.

The state complements private sector marketing by creating a brand to accomplish objectives in a strategic plan. Without that, Hawaii tourism will be defined by an industry that has its own strategic objectives.

Effectively addressing the current issues in Hawaii tourism, in fact, probably requires more investment, not less. We need to invest in marketing that strategically attracts the visitors who contribute to real economic impact.

Strategic marketing can also put a “band aid” on short-term issues by smoothing out seasonal demand and filling in areas that have relatively low visitation and occupancy. Investing to improve and expand festivals and events will enhance the visitor (and resident) experience.

We need to invest in new types of tourism-related business that build on our tourism expertise, exporting the services of engineering, architectural and training firms.

That would increase tourism related revenues without the impact of additional visitors.

Changing Hawaii tourism won’t be easy because tourism is complex and the issues are complicated. We’re at a point that cries out for a thoughtful, comprehensive plan to manage Hawaii’s tourism industry.