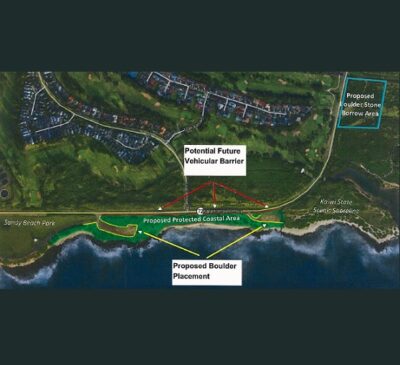 A plan calls for the placement of boulders and other traffic barriers to protect 9.5 acres of Wāwāmalu; located in the undeveloped area of Sandy Beach Park between the park’s windward driveway and the Kaiwi State Scenic Shoreline (often referred to as Alan Davis or AD’s).

In an effort to curb vehicular activity and illegal off-roading from destroying critical shoreline habitats along the Kaiwi Coast, a collaborative plan between the community, non-profit organizations, the City and County of Honolulu, and the State of Hawai‘i will place barriers within several acres of rural coastline.

The effort was initiated by a Hawai‘i Kai Neighborhood Board resolution, which called for the recognition and protection of the natural features at Wāwāmalu, including the installation of vehicular barriers.

“It is always encouraging to see the will to protect our natural environment, and actionable solutions to realize that goal, initiated by the community,” said Honolulu Department of Parks and Recreation (DPR) Deputy Director Michele Nekota. “A big mahalo to the many groups, non-profits, and the State for all working together to find the best solution to give this coastline a better chance of thriving. We believe it is truly everyone’s responsibility to help care for the land.”

The work will begin with DPR crews transporting boulders from nearby State land to designated access zones indicated on the above map. DPR will additionally be coordinating with the Hawai‘i Department of Transportation (HDOT) on alternatives to protect the site from access from Kalaniana‘ole Highway.

“This initiative is the culmination of a dedicated effort by the Hawai‘i Kai Neighborhood Board, multiple community non-profit organizations (like Livable Hawai‘i Kai Hui, the Sierra Club O‘ahu, and the Surfrider Foundation), as well as community members-at-large to ensure that we can preserve this place for our keiki and future generations,” said Honolulu City Council Chair Tommy Waters. “This plan will still allow surfers, fishermen, and other beachgoers to park in two dedicated areas along Wāwāmalu, while accomplishing the key objective of preventing the off-roading of vehicles across the dunes and beach.”

Though these barriers will confine vehicular access to designated zones on both ends of Wāwāmalu, pedestrian access will remain for the majority of the area for the cultural and recreational needs of the community. Wāwāmalu is a popular location for fishing, surfing, beach-going, scenic views, and shoreline access. Vegetation and dune restoration areas will remain restricted in order to revitalize the natural features, which provide wildlife habitat, reduce beach erosion, and protect cultural characteristics.

“The community plans to mālama this area and the stones will provide an unambiguous signal that the beach and coastal dunes are treasured for the enjoyment of all people and wildlife,” said Mike Foley, Volunteer Beach Protection Coordinator for the Surfrider Foundation. “We do not want to risk losing public access, which may happen if an endangered animal were harmed by a vehicle on the beach.”

Similar illegal off-roading has been observed at rural locations across the island, including at Bellows Field Beach Park where the closure of the public park and campgrounds was necessary last summer to protect the unprecedented nesting of approximately a dozen endangered Hawaiian sea turtles.

In April 2017, a coalition of government, non-profit, and community groups secured the last two parcels of the Ka Iwi Coastline in order to ensure its protection; culminating a 40-year community effort to keep seven miles of this scenic shoreline free of development form mauka to makai.