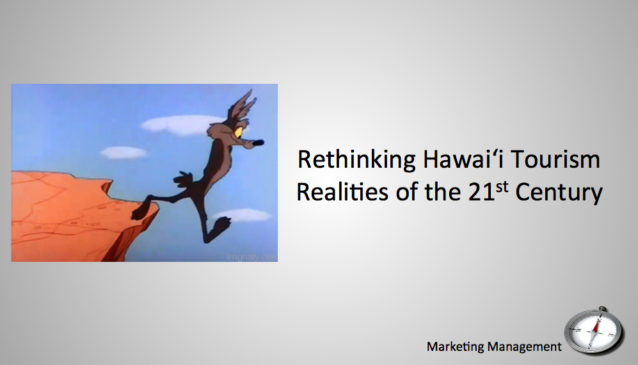 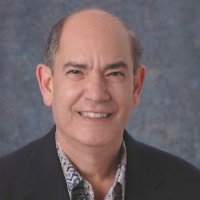 Frank Haas is the President of Marketing Management, a consultancy focused on travel and tourism in Hawaii and internationally. Haas is the former Dean and currently lectures at Kapi‘olani Community College’s Hospitality program. His experience includes executive positions in higher education, tourism and hospitality, food service, advertising, and high technology.

Haas served as Vice President and Director of Marketing for the Hawaii Tourism Authority (HTA) and was responsible for $50 million in marketing contracts for leisure and business travel, sports and convention marketing and was part of the team that developed the “2005-15 Tourism Strategic Plan.” The plan was somewhat ignored by HTA management because they did not believe they had the authority to implement the complete “mosaic” of action elements which needed to be performed simultaneously in order for the plan to function.

Frank knows the HTA literally “inside out” and for the past several months he has been actively enlisting support for his proposed changes to where and how HTA spends its $100+ million annual budget.

During a February 2018, Hawai`i State House & Senate hearing delving into the latest highly-critical HTA audit (there have been several such audits), “State Auditor Les Kondo questioned the need for the Hawaii Tourism Authority’s exemption from the state procurement code.”

The HTA was created in 1998 to promote and manage Hawaii’s tourism industry and was granted an unprecedented freedom in how it operates because of its importance to the state economy. The audit said, “However, this freedom is being reconsidered due to the discovery of an environment of loose oversight and the agency’s failure to adequately procure, monitor, and assess the work of its many contractors and an inability to follow its own policies and procedures.”

According to the audit, “HTA’s semi-autonomous model has led it to become ‘less accountable and less prepared.’ ”It was also pointed out that the salary of George Szigeti, the agency’s then CEO, was paid an annual compensation package “…of more than $440,000, which is more than two and a half times the governor’s salary.”

During the contentious audit hearing, several elected officials questioned HTA’s weak defense for the many obvious management problems which was basically, “We must be doing something right. Just look at our visitor head count now approaching 10 million annually!” Many of the approximately 50 observers in the hearing room questioned this defense knowing full well that the international tourism numbers have been on a steep upward curve for over a decade and given the hotel and airline industries massive advertising budgets and the “ultra-cheap” airline fares, HTA had little to do with generating the current high visitor count. A quick Google revealed a low $368 round-trip fare from Atlanta!

After the many local and international headline news stories about the negative HTA audit and sensing the opportunity to begin to realize the needed changes at HTA which would result in “fewer visitors and more money,” on April 18, 2018, CivilBeat.com published Frank Haas’s op-ed, “Tourism Industry Needs Better Planning, Not Budget Cuts. The State needs to invest in marketing that strategically attracts the visitors who contribute to real economic impact.”

On Thursday, July 5th, 2018, Haas, Brewbaker and Mak met with Governor David Ige and his executive staff where their concerns and suggestions were presented. When Howard Dicus of HawaiiNewsNow heard about the meeting, he contacted Frank Haas and aired a story which also ran for several days on Hawaii Public Radio News. Dicus’ article and later HPR news story HERE included the following:

– The “cash flow isn’t as good when you account for inflation, and it comes at the cost of pressure on the environment and taxing the patience of residents.”

– We depend on a larger number of people to produce a given number of vacation days. That’s why Hanauma Bay has to be closed once a week, and park rangers recently created a reservations list to see the sunrise from Haleakala.”

– “Tourism benefits the state by providing tens of thousands of tourism jobs, many of them union jobs with good wages and benefits. But constrained inventory and high room rates have driven many visitors to alternative lodgings that don’t support those jobs.”

– “‘It’s been almost 30 years since tourism actually had a record year, by constant dollar tourism receipts,-” Brewbaker says. ‘Tourism today is the same economic size as it was in 1989.’”

As noted, Frank Haas and his group became actively involved in working towards major reforms at HTA shortly after the “scathing” HTA audit. Since then, a new board of directors was installed on July 1. Although a new HTA Chair and CEO have not yet been announced, one of the new board’s first actions was to terminate CEO George Szigeti (effective November 1, 2018). Immediately after the audit and legislative hearing, the Governor had withdrawn his support for the reappointment of HTA Board Chairman Rick Fried, a prominent local attorney.

Only a few days after the Haas group’s July 5th meeting with the Governor, on July 11th Haas made a presentation to the Hawaii Tourism Wholesalers Association. Based largely on the collaborative research and presentation to the Hawaii Economic Association (above), Frank Haas has continued to drill down on Hawaii’s tourism data to present an even more enlightening presentation: Rethinking Hawaii TourismRealities of the 21st Century. In addition to the points the Haas group made to the Governor, Haas’ latest PowerPoint presentation (some 40 slides) includes some other very important albeit unsettling data including: 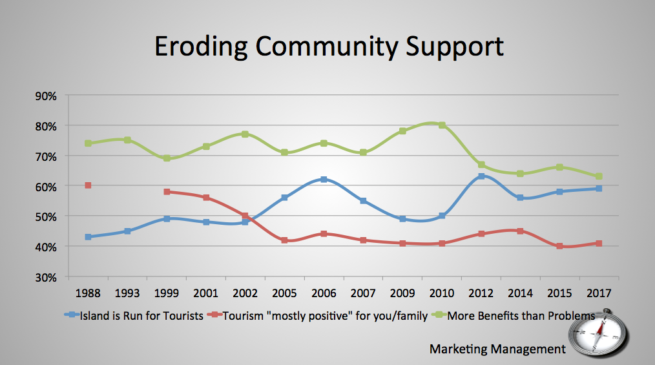 – “A place loses its identity bit by bit which, ironically, is what the tourist came to see.” NOTE: This quote is from the highly recommended 25-minute online documentary, CROWDED OUT: AN OVERTOURISM DOCUMENTARY HERE. The “overtourism” debate is taking place all over the world at virtually all of the “honeypot” (most popular) international tourism destinations such as France, Italy and in Hawaii. Hawaii residents and business leaders are not alone in looking for the solutions that would create the needed “balance.” What is Hawaii’s carrying capacity and how can we manage the growing number of visitors? Hawaii must get this right and soon or we run the risk of losing it all:

– (Above chart) Destination Phases: “Growth, stability (quality of the experience) and decline.” Where is Hawai`i on this important graph which at some point indicates a dramatic decline?

– Decline is not inevitable!! The key is managing and improving the visitor experience.

– Solutions: Back to the Future: 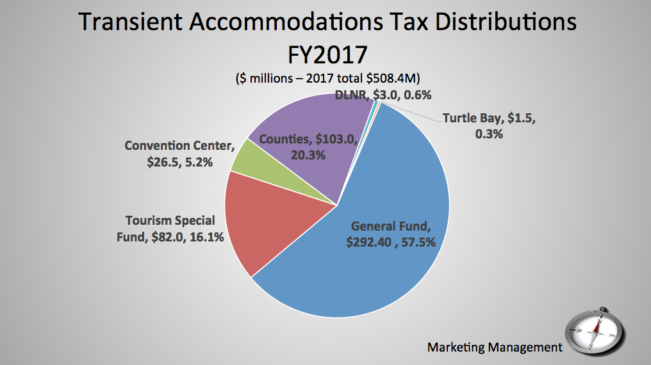 – Transient Accommodations Tax Distributions (see above graph by Frank Haas). Begin eTurboNews comment: The Transient Accommodation Tax (TAT) was originally implemented in 1987 to fund the HTA. The hotel industry went along with the tax believing that it would all be going to general tourism promotion. However, the State Legislature began raiding the fund to balance the General Fund, assist the counties and to support various other entities such as the Honolulu Rail Project. Read “How Hawaiʻi’s Hotel Room Tax became the Lawmakers’ Go-To Tax?” HERE. END eTurboNews comment.

– 2017-18 legislature approved budget cuts in a contentious session following a damning audit. The issue is, “Taking your foot off the gas” vs. “Taking your hands off the steering wheel.”

– Unless HTA can demonstrate a change in heart, more cuts and pushbacks are likely.

– You Can’t Win at Chess if You’re Playing Checkers.

– Change Marketing Direction. Tourism’s dirty little secret: Hotels, airlines and others will fill beds and seats no matter what the destination does. The destination’s best strategy is to manage who fills those rooms.

– Focus on high spending micro markets and “the long tail” which includes many smaller but desirable niche markets.
– Direct the marketing contractors – take control of strategy.
– Make the Convention Center a World Class site for high end meetings.
– Broader authority to coordinate all aspects of tourism marketing
– The difference between marketing and promotion
– Justify higher spending on strategic initiatives
– Change the measures of success
– Emphasize and dominate higher spending categories

What NOT to fund:
Stick and ball sports
UFC
Peak season travel
High impact activities
Indoor/arena events
Anything “off brand”

What’s a Wholesaler to Do?
Stay informed. dig into the numbers
Advocate for strategic budgeting and programs
Provide input get a seat at the table
Watch for trends respond to opportunities
Testify when issues arise that affect you

Mahalo from eTurboNews to Paul Brewbaker, John Knox, James (“Jim”) Mak and Frank Haas for their research and their efforts to better educate the public on the vital importance of managing Hawaii’s tourism industry for the benefit of all concerned, including Hawaii’s residents.