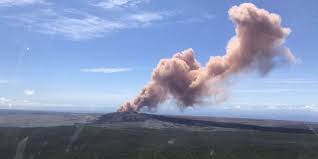 HAWAII: Situation getting more “dire.” 5.6 earthquake just reported under the ocean near Hawaii Island “in the vicinity of the South flank” of the Kilauea volcano. No tsunami is predicted.

After the Kilauea volcano eruption slowed late Thursday night, the Hawaii County Civil Defense has confirmed that new volcanic vents are erupting in what’s known as “the East Riff Zone.” This large area in the Puna District of Hawaii Island aka “the Big Island” includes the rural Leilani Estates near Kaupili, Makamae and Mohala Streets.”

Over 600 earthquakes have been reported including and on Thursday, a larger quake was measured as having a magnitude of 4.7.

In addition to the obvious potential physical damage of the new lava flows from the Kilauea eruption, the mandatory evacuation continues because of the high level of sulfur dioxide gas being emitted. Although thought possible, the eruption with such major underground activities was unexpected.

The Big Island Video News reported: “Hawai‘i Governor David Ige was on the Big Island Friday, as the state mobilizes to assist the Puna area as it faces an ongoing volcanic eruption within the Leilani Estates subdivision.” The Governor had signed an emergency proclamation Thursday night, saying “the danger is of such magnitude that it warrants preemptive and protective action in order to provide for the safety, health and welfare of the residents of Leilani Estates and surrounding areas.”

The proclamation authorizes the expenditure of state monies as appropriated for quick and efficient relief caused by the volcanic eruption. Governor Ige said he is also working on federal avenues for assistance.

eTurboNews will continue to report on the Hawaii Island Volcano eruption as circumstances change.