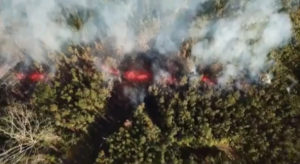 The Governor said, “I am in contact with Mayor (Harry) Kim, and the state is actively supporting the county’s emergency response efforts. A Hawaii National Guard spokesman told the Honolulu Star-Advertiser that additional soldiers will be called up Friday, however he did not have a specific number.”

A close friend in Puna told us, “the ground under a large community gathering began to develop a long crack and the ground became very hot with steam rising in a few places. Kamaaina knew this was happening because of the hot lava moving through the many lava tubes. “We loaded the car and got outa’ there” my friend related. Although he and his family live several miles away from the current danger zones, that could change in a heartbeat.

There have been many smaller earthquakes during the past few days but the U.S. Geological Survey said today’s large quake was magnitude 4.7.

eTurboNews will continue to report on the Hawaii Island Volcano eruption as circumstances change.