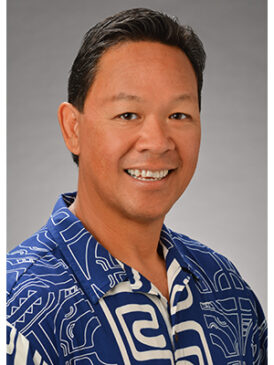 Mayor Rick Blangiardi announced his selection today for Chief of Staff. Sam Moku will step into his new role with the City beginning February 1.

Moku leaves his post as the Executive Director of Athletics and Community Relations at Hawai‘i Pacific University (HPU) where in addition to his role leading the Athletics Department, he oversaw HPU’s government and community relations.

“Sam brings with him a wealth of knowledge in local government and an incredible work ethic,” said Mayor Blangiardi. “In all the years I’ve known Sam, I’ve known him to be a man of high integrity and strong character. From finding facilities for his various HPU athletic teams to call home, to forging a way forward to help address the growing number of Native Hawaiian families struggling with homelessness, he is truly a problem solver and someone on a passionate pursuit to make things better. We are so proud to have him on our team.”

Moku, a former defensive back for University of Hawai‘i football Head Coach Dick Tomey, was named Warrior of the Year in 1986. He has also served as Head Coach for the boys track and field team at Kamehameha Schools Kapālama, leading them to three State Championships.

Moku is a graduate of Damien Memorial School and the University of Hawai‘i at Mānoa. He holds a bachelor’s degree in Economics and a master’s of Business Administration.