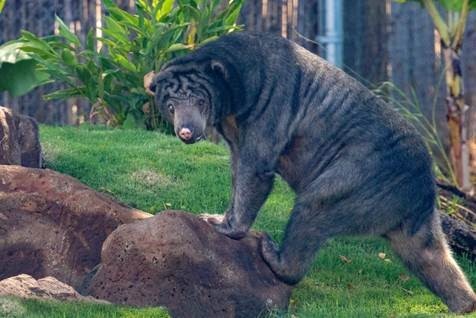 – It’s with sadness that the Honolulu Zoo announces Juwita, a 25 year-old female Malay sun bear, was euthanized Tuesday, November 17, in the best interest of the animal.

Honolulu Zoo Director Linda Santos, veterinarians, curators and keeper staff assessed Juwita’s condition and made the difficult decision to euthanize her due to complications from cancer.

Juwita and Blackie, the male sun bear, came to the Honolulu Zoo in 2008 as a pair from the Cleveland Zoo and are a favorite of many staff and visitors. “Juwita’s passing is a huge loss as the wild sun bear population is critical and the number in captivity is low,” said Santos.

The Honolulu Zoo is working with the Association of Zoos and Aquariums Species Survival Plan to find another companion for Blackie.

Sun bears, the smallest of the bear species, are found in the tropical forest habitats of Southeast Asia. They have an average life expectancy of approximately twenty years in captivity.