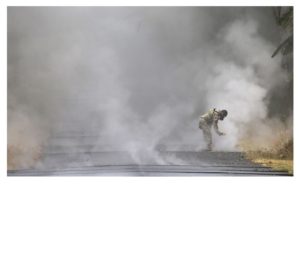 How safe are tourists visiting the Kona and Waikoloa side of the Island of Hawaii?

According to Ross Birch, Island of Hawaii Visitors Bureau (IHVB) executive director, it’s safe and enjoyable for tourists to visit Kona and Waikoloa on the Island of Hawaii, also known as the Big Island.

The good news is, when lava hits the ocean, vog spreads more as compared to what is happening now when lava explodes on land. According to the Island of Hawaii Visitors Bureau, the current condition is safe, and tourists should be able to enjoy the island. Record visitor numbers are witness to this success.

The reality may look a little different. IHVB admitted visitors sensitive to air pollution and visitors with asthma may want to travel to areas that may have better air quality. This is a message the island has had to already deal with for years with Kilauea always active.

eTN talked to the National Weather Service (NWS) in Honolulu, and this weekend, for example, the vog condition on the Kona Waikoloa area of the Island of Hawaii is expected to have critical measurements. According to a spokesperson from the NWS, people with asthma should stay indoors and turn the air-conditioner on. Visitors with asthma should make sure they take their inhaler with them when vacationing on the island.

All Hawaiian islands enjoy trade winds throughout most of the year. Normal trade wind conditions pull dirty air out away from the island chain to the ocean and blows fresh clean air in towards the islands. This is an ideal condition, but what about when the trade winds change?

Such a change is frequent, and several years ago, the island of Hawaii had 3 months of no trade winds.

Tomorrow, for example, trade winds are expected to change direction and volcanic fog will most likely blow over the island chain affecting parts of the islands of Maui, Oahu, and even Kauai.

This is a message critical to the visitor industry and has been deliberately toned down by tourism officials. When eTN asked the spokesperson of the National Weather Service what the effect will be for tourism with the current volcanic situation, the response was, “We only predict the weather, but not tourism.”