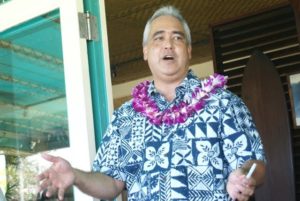 Less than a week after another “scathing” State audit of the Hawaii Tourism Authority (HTA) was publicly reviewed during a joint House & Senate Tourism Committee Informational Briefing (02/28/2018), an undisclosed December 8, 2017, “Resolution of Charge” decision by the Hawaii State Ethics Commission came to light.
The settlement included a $12,000 fine against Hawaii Tourism Authority President & CEO George Szigeti; former HTA COO Randy Baldemor (Szigeti’s personal hire), Jadie Goo, HTA Director of marketing for China, Hong Kong and Taiwan, and David Uchiyama, the former HTA VP of Brand Management. By coincidence or not, Baldemor had resigned only a few weeks before the “scathing” audit was released to the public.
Interestingly, David Uchiyama had departed HTA in April of 2016 to become the President and CEO of the 37-year old Island Air. At the time, one media story read, “Uchiyama has a long track record in the local visitor industry, including serving as VP for brand management at the Hawaii Tourism Authority.”
18-months later, in October of 2017, Island Air announced its bankruptcy after the airline’s leasing company acted to repossess its five new Bombardier Q400s planes. Sadly, Island Air’s 400 employees were surprised to learn that their health insurance had not been paid in time to give them access to the state’s COBRA plan (transitional health insurance) AND they would be at the bottom of the list to receive their last month’s payroll checks. Access to their 401K savings plans were also encumbered. One might only wonder about how much David Uchiyama’s questionable management skills contributed to the many negative HTA audits during his years at the Hawaii Tourism Authority.
In any event, the disclosure of the HTA ethics violations couldn’t have come at a worse time for the beleaguered organization which is responsible for marketing Hawaii in the highly-competitive international travel market. During the February 28th legislative briefing, Hawaii State Auditor Les Kondo revealed many details of the continuing mismanagement of the HTA and its $120+- million annual budget. Those who have criticised the good-old-boy antics and revolving door of grossly over-paid and under-qualified HTA executives through the years should at least feel vindicated by the following paragraphs from the audit’s concluding comments addressing the official HTA written response to the audit which was signed by HTA Board Chair L. Richard Fried, Jr. and George D. Szigeti, HTA President & CEO:
“HTA’s position is that the ends justify the means, characterizing its undisciplined spending and procurement practices as a necessary part of its self-proclaimed accomplishments. Throughout its response, HTA touts increased visitor arrivals and a “positive net balance” in the Hawai‘i Convention Center’s operations to rebut the findings. Among its response statements:
“While the scope of our audit did not include reviewing visitor arrivals, expenditures, or related information, we do not question HTA’s reported statistics. However, as HTA is aware, it is difficult, if not impossible, to assess the direct impact of HTA’s programs and activities on visitor arrivals and spending. Regardless, as a State agency, the ends do not justify the means. The semi-autonomy that it has been afforded, including the exemption from the State Procurement Code, does not give HTA the unfettered discretion to contract and to spend public funds. HTA must be accountable. HTA must oversee its contractors to ensure compliance with contract terms, especially those terms intended to benefit and protect the State; HTA must procure goods and services fairly and at a reasonable cost; HTA cannot recklessly spend public funds.”
“HTA defends its procurement practices, including the use of sole source procurement, by referencing the initial purpose of exempting it from the State Procurement Code: that HTA’s effectiveness in competing with other tourist destinations is based on the speed with which it can contract with other entities and execute its programs. However, that justification – the need to contract quickly to compete with other
markets – does not explain HTA’s haphazard approach to procurement, ignoring its own procurement policies and procedures, and using sole source procurement for services that more than one vendor offers.”
Simply put, the 2018 State Audit reconfirms what anyone paying attention has known for years. HTA has been and continues to be operated as a small club of insiders who use their positions to keep outsiders out and the insiders in. From my marketing experience (50 years), such gangland style activities keep Hawaii at a great disadvantage. New ideas never see the light of day and HTA continues to operate using a 1960s marketing model which is slow to react to competitive challenges and changing trends. In fact, many marketing professionals around the world consider the HTA to be a laughing stock. So much more could be done with that $120+ million budget but until the State Legislature and/or a Governor cleans house, nothing will change. HTA should be shut down and management of the Convention Center should continue to be outsourced to professionals and carefully monitored.
Our next installment in this series will further detail what and who’s wrong at HTA and what marketing model should be considered before many more $millions are squandered.