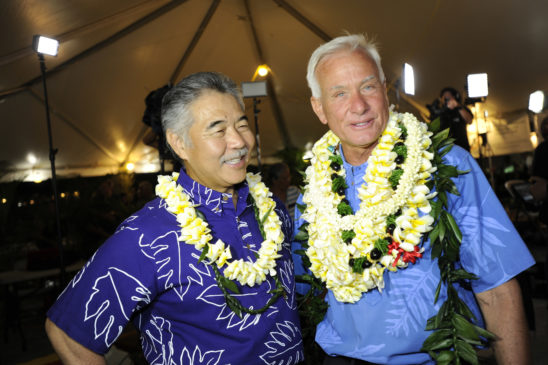 Hawaii Governor Ige wants to take charge of his State ordering the 4 mayors of the 4 counties in the State (Honolulu, Maui, Kauai, Hawaii) to seek approval before making any decisions and announcements in regards to the COVID-19 emergency.

Kirk Caldwell, the outspoken mayor of the county of Honolulu is not too happy to be shut up and issued the following statement:

“We agree with many of the actions taken today including the opening of beaches for exercise, and the extension of the 14 days travel quarantine.
However, we have concerns that the action taken today will affect the City and County of Honolulu’s ability to act quickly and deliberately during this crisis.
The City and County of Honolulu and I as Mayor agree on the need for greater consistency and coordination of decision-making between the State and all four counties.
As Mayor of the City and County of Honolulu, I will continue to make decisions based on science, data, and informed by medical professionals, along with nationwide best practices.
We will work diligently to provide the Governor and HI-EMA with sufficient advance review of any orders or proclamations that we plan to issue that directly impact our residents.
I look forward to the Governor’s expedited review and approval without delay so that we can continue to stay ahead of this pandemic.
The re-opening of Honolulu’s economy must be done in a deliberate way, with continued coordination between the counties and our state government.
The City and County of Honolulu are committed to continuing to do this.”
Caldwell’s letter to Ige reads: 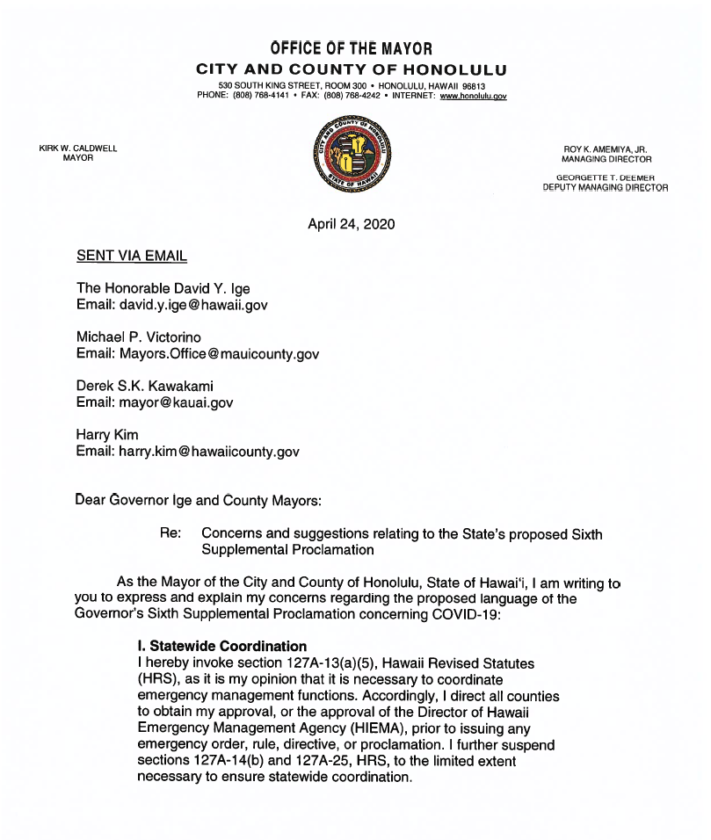 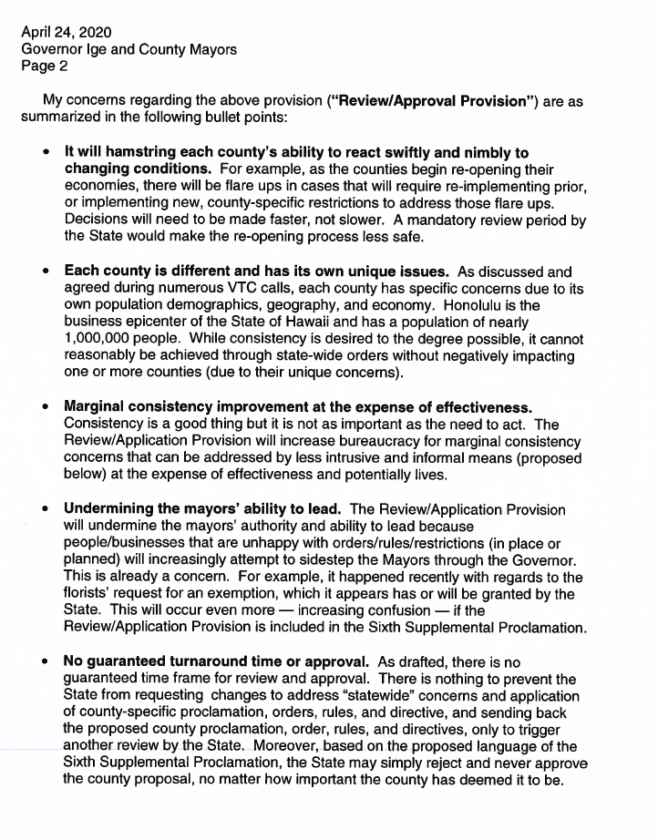 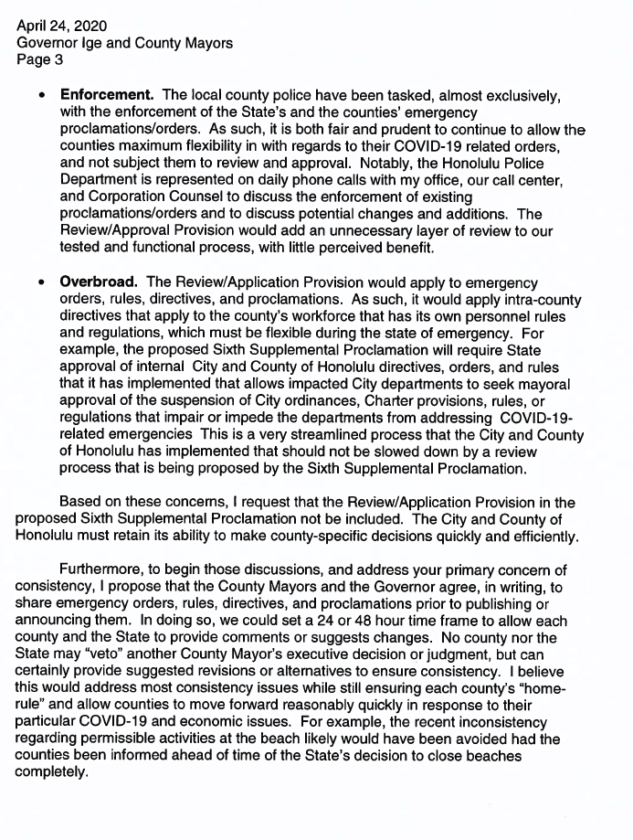 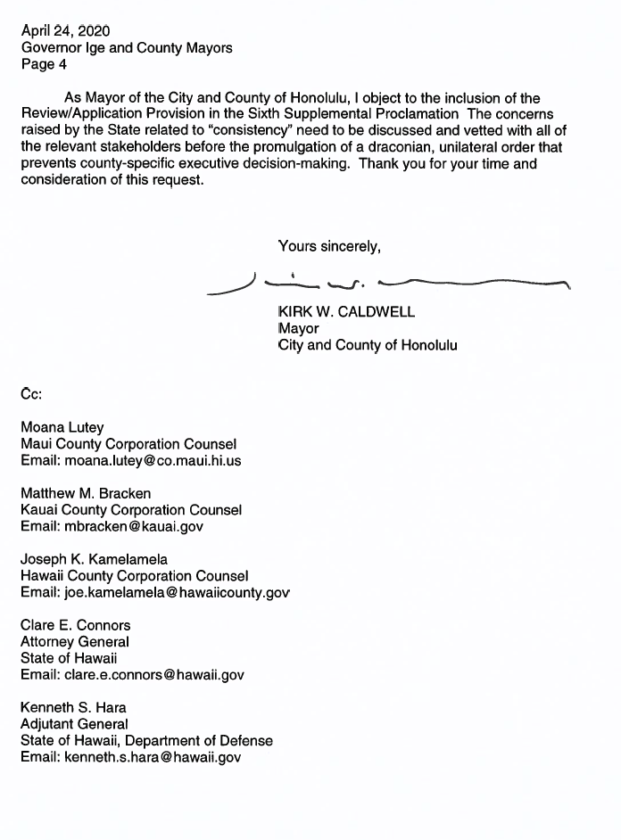 I hereby invoke section 127A-13(a)(5), Hawaii Revised Statutes (HRS), as it is my opinion that it is necessary to coordinate emergency management functions.

Accordingly, I direct all counties to obtain my approval, or the approval of the Director of Hawaii Emergency Management Agency (HIEMA), prior to issuing an emergency order, rule, or proclamation.

I further suspend sections 127A-14(b) and 127A-25, HRS, to the limited extent necessary to ensure statewide coordination.

II. Invocation of Laws The following emergency provisions are expressly invoked, if not already in effect upon declaration of an emergency on March 4, 2020: S directing the Director of HIEMA and the administrators of each county emergency management agency to take appropriate actions to direct or control, as may be necessary for emergency management, the following:

a. Alerts, warnings, notifications, and activations;

b. Warnings and signals for alerts and any type of warning device, system, or method to be used in connection therewith;

c. Partial or full mobilization of personnel in advance of or in response to an actual emergency or disaster;

d. The conduct of civilians and the movement and cessation of movement of pedestrians and vehicular traffic during, before, and after alerts, emergencies, or disasters;

e. The shutting off of water mains, gas mains, electric power connections, or suspension of other services; and

f. A mandatory evacuation of the civilian population.

What is the latest order by Governor Ige in regard to restrictions in place to combat COVID-19 in the State of Hawaii? Click here to read.