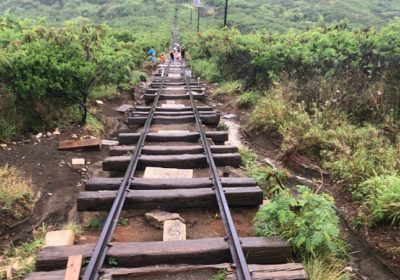 A project designed to address deficient Koko Head WWII structures which pose a public safety risk will begin next week. The WWII-era summit structures were constructed in 1942 by the U.S. Military and formerly served as a radar station. This radar station was turned over to the Air Force in 1947 and then returned to the City and County of Honolulu in 1966 when it was deactivated. Since its formal deactivation the installation has degraded severely.

To date, portions of the former installation remain, many of which pose a significant safety concern. This project aims to mitigate those safety concerns, including:

The use of a helicopter for transporting materials and equipment to the summit will be required intermittently, with work hours scheduled from 7 a.m. to 3:30 p.m. Therefore, nearby residents and District Park users should expect increased air-traffic in the area. This may also impact operating hours at the Koko Head Shooting Complex. More details on the adjusted complex schedule will be posted as they become available.

The contract for the project was awarded to Kaikor Construction Company, Inc. at a cost of just over $439,000.

This project does not include repairs to the tramway track, other than the previously mentioned tramway signage at the trestle.

The City and County of Honolulu is in the early planning stages of exploring options for tramway improvements.  This is a long-term effort and we greatly appreciate the patience and understanding from the public during this process.