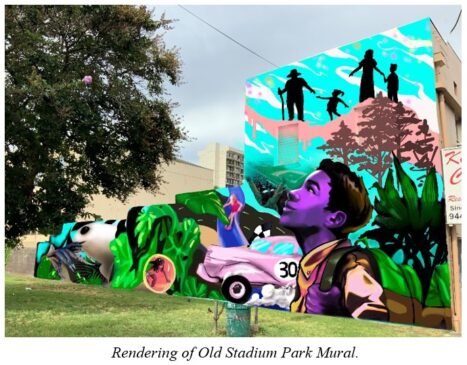 The rich, diverse history of Mōʻiliʻili and Old Stadium Park will come to life in a community-inspired mural being painted at the urban park beginning this week. The mural will adorn a once graffiti-ridden wall at the ‘Ewa, mauka-end of the park shared between the City and the nearby building owner.

The over 9-acre public space sits above underground caves and was home to Honolulu Stadium from 1926 to 1976 before it was designated as an urban park approximately 2 years later. When the stadium stood, it hosted football, baseball, and other sports exhibitions. The park has since become a multi-use common area that welcomes a variety of activities.

“I have so many fond memories of Mōʻiliʻili, especially during my playing days for the University of Hawai‘i in the 1960’s and later as an Assistant Coach for the Rainbow Warriors in the 1970’s,” said Mayor Rick Blangiardi. “I am encouraged to see such a vibrant piece of public art paying homage to that era, the natural history, and various uses of the park, while also looking ahead to the future generations who can enjoy this revitalized public space. Mahalo to the many groups who assisted with this piece, and those who continue to improve and reactivate Old Stadium Park.”

The mural is the result of a collaborative effort between the City, AARP Hawai‘i, Blue Zones Project Hawai‘i, Voyager Public Charter School, Age-Friendly Honolulu, and the community at-large. Inspiration for the various elements of the mural were derived from the input of more than 600 area residents and other park stakeholders. The design was finalized by local muralist Luke DeKneef, whose team will install the mural, following a multi-generational design workshop with community members and keiki from Voyager School.

“There has been a tremendous outpouring of support for this mural project from nearby residents, community groups, schools, and businesses,” said Colby Takeda, Senior Manager of Blue Zones Project. “We hope this art piece can help to share the vibrant history of Honolulu Stadium, bring pride to the Mōʻiliʻili community, and envision a thriving public space for all community members—keiki to kūpuna—to enjoy for generations to come.”

Other recent improvements to the park and the surrounding area include street painting & bulb-outs at the intersection of King and Isenberg streets, a renovated comfort station in November 2018, and a  refurbished play apparatus in December 2016.

“Projects like this help make Honolulu a more livable city,” said Keali‘i Lopez, the AARP Hawai‘i State Director. “The mural honors the rich past of the surrounding area and the former site of Honolulu Stadium. We support the mural and attempts to improve Old Stadium Park, including recent traffic improvements at the intersection of Isenberg and King streets, because having a more livable city also means having a more Age-Friendly City that people of all generations can enjoy.”

AARP Hawai‘i is currently soliciting grant applications from non-profit groups to fund projects like the Old Stadium Park mural, which bring people of all ages together and make neighborhoods better places to live. To find out more about the AARP Livable Communities Initiative 2021 Community Challenge Grants go to  www.AARP.org/CommunityChallenge.

Blue Zones Project is a community-led, well-being, and improvement initiative designed to make the healthy choice the easy choice through permanent changes to lifestyle, environment, policy, and community partnerships. It was brought to Hawai‘i through an innovative sponsorship by the Hawai‘i Medical Service Association (HMSA) in collaboration with Sharecare and Blue Zones, LLC.