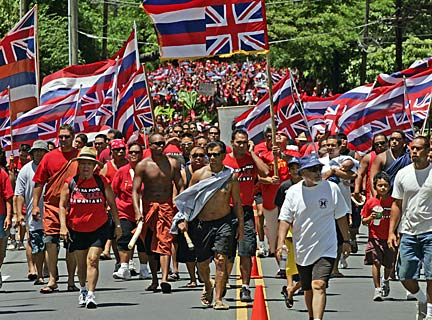 Hawaii doesn’t need a US Federal Government. This is the opinion of a separatist group named the Kingdom of Atooi that stormed the Office of Hawaiian Affairs in Honolulu today and caused a lockdown and massive police intervention.

The Kingdom of Atooi stormed the Office of Hawaiian Affairs (OHA) stating that they were there to arrest trustees and seize assets. This caused a lockdown that lasted several hours as the group remained, and the office was evacuated during the incident.

Dozens of police officers from the Honolulu Police Department (HPD) arrived on the scene. It was reported that two office employees were assaulted although no injuries were reported. At the conclusion of the lockdown, some members of the group were arrested by HPD.

On January 17, 1893, the Kingdom of Hawaii was overthrown by the US Government. A commemoration event today at Iolani Palace called “Onipaa Kakou,” which means “We Are All Steadfast” was held by hundreds who gathered on the palace grounds. The observance was a peaceful march starting at the Royal Mausoleum and proceeding to Iolani Palace.