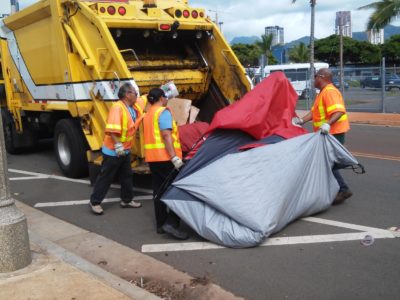 Over 70 officials, organizations, and individuals — representing a broad range of interests and constituencies — released a statement today calling for a halt to sweeps of the houseless families during this ongoing pandemic. Many members of this community are families, but the City and County of Honolulu and the Honolulu Police Department have promised to continue citations and arrests for anyone in parks and beaches, even if they have nowhere else to go.

The statement and list of signatories is as follows:

We call on the leadership of the City and County of Honolulu — and the Honolulu Police Department (HPD) in particular — to stop sweeping our houseless neighbors in the middle of this unprecedented global pandemic. It is cruel, legally questionable (at best), and a threat to public health and safety. Public health experts locally and nationally say this is bad health policy, and the Centers for Disease Control (CDC) itself has weighed in with the following guidance: “Considerations for encampments — If individual housing options are not available, allow people who are living unsheltered or in encampments to remain where they are. Clearing encampments can cause people to disperse throughout the community and break connections with service providers. This increases the potential for infectious disease spread.”

That is crystal clear. And yet — flying in the face of CDC guidance — last week HPD Chief Susan Ballard said people who are unsheltered will be cited and arrested if they are in the parks or on the beaches. Making this more confusing is the fact that since the pandemic began, more than 10,000 citations have been issued statewide — thousands to people who are unsheltered — and prosecutors on Oahu and Maui have begun dismissing those citations en masse because they never should have been issued in the first place. This is because people who are houseless are exempt under the emergency orders because they have no place else to go. Issuing new citations after dismissing old citations is nothing more than harassment.

We all want people who are unsheltered to get into housing, but our shelters now have less space than ever because of social distancing guidelines. Just this week there has been an outbreak of COVID-19 at the Iwilei homeless shelter. Forcing more people inside will make this worse. And if an unsheltered person is arrested for being in a park or on a beach on O‘ahu, they’ll be sent to the O‘ahu Community Correctional Center, which is now seeing its own growing outbreak of the virus. We never agree with these sweeps. They’re cruel, ineffective, and the 9th Circuit Court of appeals has said sweeps like these are unconstitutional, a decision the U.S. Supreme Court let stand. But aside from those legal, philosophical, and humanitarian differences with the City’s policy, continuing with sweeps now is endangering public safety, not protecting it. Please join us in a call to end this practice, at least until this pandemic is behind us.

Medical-Legal Partnership for Children in Hawai‘i