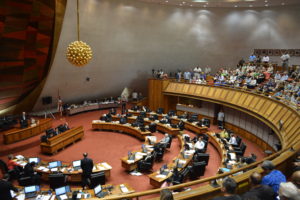 April 10, 2018
HAWAII HOUSE BILL BANS “CONVERSION THERAPY”
By Scott Foster
HONOLULU: Today, the Hawaii House of Representatives passed an amended Senate Bill (Senate Bill SB 270) which would ban the abusive practice of so-called “Conversion Therapy” which has been falsely claimed “to make Gay people straight.” Because the House added several amendments, it will still need to pass a conference committee before it can be sent to Hawaii Governor David Ige for his signature. Ige has been a longtime champion of LGBT rights. Hawaii’s State Senate had earlier passed the legislation with only one senator voting “no.”