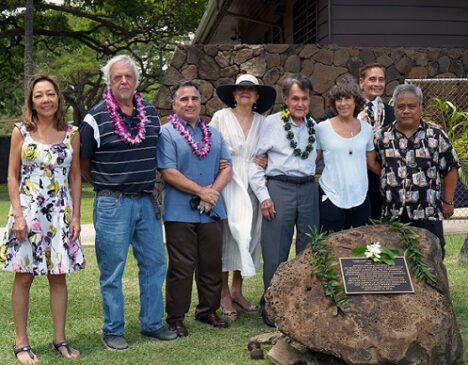 Mayor Rick Blangiardi held a ceremony today to dedicate a plaque at the Tom Moffatt Waikīkī Shell honoring legendary concert promoter and entrepreneur Tom Moffatt. Moffatt passed away in 2016 after a six-decade career promoting events in the islands.

“I was privileged to be able to call Tom Moffatt my friend. He was larger than life and had an incredible generosity of spirit which helped make him a one-of-a kind radio personality and promoter,” said Honolulu Mayor Rick Blangiardi. “His passion, talent and dedication to bringing in awe-inspiring world class performances to Honolulu has set a standard for live events in Hawai‘i and created special and long-lasting memories for generations of our residents.”

“Tom was a devoted partner for what would have been 60 years this May. He was full of passion—for his work, for his family, for the people of Hawai‘i,” said Mrs. Sweetie Moffatt. “From the moment he arrived here from the Midwest, he embraced the Island culture and was fully grounded and very clear on what he could do for Hawai‘i. Tom’s affinity for the Islands reflected a deep respect for Hawai‘i’s roots. At the same time, he recognized the musical pathways that would more deeply connect the 50th State to the rest of the nation.  He will always be the love of my life.”

“Tom and I met in 1952 at Schofield during the Korean War.  We hit it off immediately and remained close until his passing,” said John Henry Felix.  “He was a man of unique character who was fiercely loyal to his friends and family.  He made a way where there was no way and stuck to his principles to make things happen due to his love of Hawai‘i and its people.  He loved all people from all walks of life and loved to bring new things to the people of Hawai‘i.  He is sorely missed.  I am deeply honored to have called him friend.  Thank you to the Mayor, Jerry Pupillo and all those who have made this dedication happen.”

“The many decades I worked with Tom shaped me into the person I am today,” said Andrea Dismuke, CPA.  “His can-do attitude was infectious, impossible was not in his vocabulary.  A favorite phrase he loved, “Truly Outstanding,” was used often by him and simply sums up all there is to say about this man, his love for Hawai‘i and its people through all the trailblazing paths that he undertook.  There will never be another like him.”

Tom Moffatt became a household name in Hawai‘i when he brought Elvis Presley to perform for thousands of fans in 1957. Since then, he booked dozens of high-profile acts, including Frank Sinatra, the Rolling Stones, Jimmy Hendrix, Elton John, Michael Jackson and Bruno Mars.

In 2002, Moffatt earned the Nā Hōkū Hanohano lifetime achievement award and was named by Honolulu Magazine as one of the 100 most influential people in Honolulu. He was nominated to the National Radio Hall of Fame in 2009.

The plaque is located at a spot between main gate and Shell stage that Moffatt was frequently seen during shows as he took in the technical aspects of the production, perused the crowd and enjoyed the music. It states, “Mahalo nui loa for bringing so much joy to the people of Hawai‘i for over half a century. The consummate showman, your productions featuring iconic artists who enthralled audiences from around the world. In deep gratitude for your priceless gifts to the citizens of Honolulu, the City and County of Honolulu dedicates the “Tom Moffatt Waikiki Shell” in your loving memory.”

The City and County of Honolulu proclaimed April 12, 2014 to be “Tom Moffatt Day” in honor of the 50th anniversary of his first show at the Neal S. Blaisdell Center. On August 17, 2017, the City Council adopted Resolution 17-229, renaming the Waikīkī Shell the “Tom Moffatt Waikīkī Shell.”

The Tom Moffatt Waikīkī Shell has recently reopened to live events in compliance with Tier 3 of Honolulu’s COVID-19 Recovery Framework. The Hawai`i Symphony Orchestra has scheduled performances on weekends through August 2021. For more information on the performances please visit: https://www.myhso.org/